Hang on for the ride in this insanely surreal comedy-drama 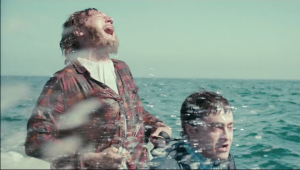 As we were walking into Swiss Army Man, I discovered that my friend Adam, who I’d brought to the movie, didn’t know anything about what we were about to see. I giggled, because I knew that the movie was about a guy stranded on a deserted island who befriends a farting corpse. Adam was going to be very surprised. Ten minutes into the film, he whispered, “What the hell? This is like Weekend at Bernie’s.” To which I responded, “Crossed with Castaway!” But the film is a lot more than being the bastard child of a low-rent ‘80s comedy about two men who cart around the dead body of their boss claiming he’s alive and a high-brow Tom Hanks drama about survival and the meaning of life. Yes, it’s as bizarre and puerile as Bernie’s and aspires to Castaway’s depth; Swiss Army Man uses the insanity of its premise to create a powerfully symbolic fever dream about the power of friendship to heal the wounds of a lifetime of loneliness.

The film opens with a disheveled, dejected Hank, played by a brilliantly sensitive Paul Dano, alone on a small island in the middle of the ocean, where he is setting up a ramshackle noose with which to hang himself. As he is getting the courage to commit suicide, he sees a man wash ashore. He almost kills himself rushing to the figure, who turns out to be both dead and played by Daniel Radcliffe (continuously ballsy in his post-Harry Potter choices). Depressed once again, Hank almost goes through with the hanging before he notices something odd about the corpse: it’s farting, and it’s farting a great deal. In fact, its farts are so powerful that they can propel the body like a jet ski. The opening credits roll as Hank rides the corpse across the waves and swells, screaming in joy. (This is when I looked over at Adam and saw his jaw drop.)

Hank wakes up on the shore of what looks like the mainland. He has become emotionally attached to his corpse, so he drags it behind him as he wanders through the garbage-strewn forest, searching for water and food and civilization – and the object of Hank’s affection, played mostly in flashback by Mary Elizabeth Winstead. One morning, desperately thirsty, he discovers that in addition to being a fart engine, the corpse is also a water pump – push his stomach and seemingly clean water spouts from his mouth. And then the corpse wakes up. Because at this point, why not? He can’t really move and can only barely talk and remembers nothing of being alive, but he takes the name Manny and joins Hank on his mission. As Hank teaches him about manners (like not farting in front of people) and women (which leads to Manny’s nearly magical erections), they become epically close friends.

Writer-directors Dan Kwan and Daniel Scheinert were best known prior for their insane, ground-breaking, and now iconic video for Turn Down the What, which has been seen over 500 million times on YouTube. Swiss Army Man is their first narrative feature, and it takes their bonkers and quite original aesthetic and wraps it around a somewhat traditional buddy comedy. In some ways, the script, which is often as sweet as it is ribald, goes to expected places, and then it veers into places where I was shocked to arrive. I was moved but I was also disappointed when the Daniels’ (as they’re known) didn’t fully embrace the queerness that they worked hard to set up. I think most viewers who sat through the whole film will cheer the ending, but I was left a little dejected by the Daniels’ embrace of traditional heterosexism in a film as deliriously iconoclastic as Swiss Army Man.

Written and Directed by Dan Kwan and Daniel Scheinert 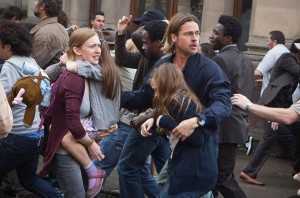 People are scared that the end is coming. I don’t think they actually believe that Judgment Day is nigh, or that an extinction-level asteroid is on its way, or that Syria (or North Korea, or Taiwan) is going to lead to World War 3, or that a virus will mutate into a pandemic as deadly as the Spanish flu or whatever it was that nearly ended human civilization in Contagion, 28 Days Later, or The Walking Dead. But all of these things are making people anxious – very, very anxious – and somehow this is translating into a desire to buy tickets to movies about what these people are anxious about. They actually make me more anxious than I was already, but it seems that for some people these movies calm them down, sort of like how speed calms down kids with ADHD.

Maybe it’s because they teach us how to respond to the end. Last week, I wrote that, in contrast to the narrow scope of the comedy This is the End, “when Hollywood tackles the end of the world we get giant sci-fi epics focusing on teams of either super-heroes or super-heroic soldiers making the planet’s last ditch effort to stave off oblivion.” Like religious myths of ancient times about deity-caused dooms, these movies tend to have powerful moral centers; we learn how people should behave when most people are about to die. The need for selfless heroism is the lesson of World War Z, the frightening, if somewhat flawed zombie apocalypse movie starring Brad Pitt and directed by Marc Forster. END_OF_DOCUMENT_TOKEN_TO_BE_REPLACED

The bodies get warmer 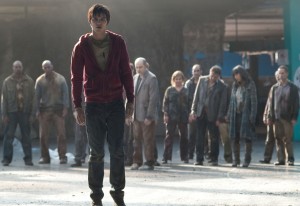 This was pretty delightful. Great soundtrack, too.

This winter, two of my students are writing research papers on why zombies are such a popular topic in media culture. And what they’ve taught me is that, while horror trends come and go for all sorts of reasons, zombies stories, with their mindless mobs chasing lone survivors, tend to reference cultural anxieties about pending invasions; for much of second half of the 20th century, it was about the Cold War, and since then it’s been about the fear of some mixture of globalism and out-of-control viruses. Even when the zombie story is very well done – the remake of Dawn of the Dead, or 28 Days Later, or The Walking Dead – dread and hopelessness are so central to that plot that I become unnerved. So badly, in fact, that I walked out of Dawn of the Dead and stopping watch The Walking Dead after the first season. But hope and love are the central themes in the zombie romance Warm Bodies, and that is why I liked it so much. END_OF_DOCUMENT_TOKEN_TO_BE_REPLACED