This illusion of paradise has a dark side 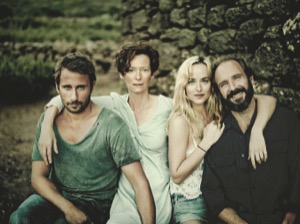 In one of the first scenes of Luca Guadagnino’s fantastic A Bigger Splash, Marianne Lane (Tilda Swinton) and her lover Paul de Smedt (Matthias Schoenaerts) are relaxing on the rocky, sun-bleached beach of an Italian island in the Mediterranean. It seems idyllic; they’re beautiful, clearly in love, and the setting reeks of wealth. But then you notice that the sun is too bright, the blue sky not quite beautiful and there are flies buzzing everywhere, like they might over rotting garbage. A cell phone rings and Paul answers because Marianne can’t. She cannot speak because, we find out later, she’s on vocal rest after throat surgery. The caller is Marianne’s ex Harry Hawkes (Ralph Fiennes) and he speaks rapidly, almost maniacally, and is calling from an airplane, announcing he’s coming to visit them. A jet roars over Marianne and Paul: Harry’s already here.

If anything is foreshadowing how badly the visit will go it’s those flies. Paradise is festering. And paradise isn’t just the island in the Mediterranean, but Marianne and Paul, too. When Harry comes through the gate at the airport, he’s almost terrifying in his enthusiasm and his inappropriate familiarity with Marianne. The contrast between him and the lithe and silent Marianne and the laconic, measured, clearly un-thrilled Paul is stark.

Added to this weird trinity is the young, gorgeous Penelope (Dakota Johnson), who is introduced as Harry’s daughter, one he didn’t know he had until the past year. Immediately, we can tell Penelope’s a problem. She’s petulant, precocious and manipulative as she flirts with both Paul and, creepily, Harry. Whether she’s more of a danger than her father is unclear, but she’s clearly up to something. By the end of the film’s first act, the mostly unspoken tensions – romantic, aesthetic, historic – between these four past, present and future hedonists has become unnerving. And thrilling.

Having Swinton silent for most of the movie, with her only words coming as whispers, is just one of the ways that Guadagnino keeps the viewers off-kilter. Marianne cannot respond to Harry’s rapid-fire declarations (of opinion, love, lust), and she cannot properly state her desires. Harry talks too much, Marianne too little, while Paul and Penelope seem to be saying things that don’t appear to be honest, either emotionally or factually.

Fiennes, in one of the greatest performances of his career, is as explosive, in both hilarious and sinister ways, as Swinton is restrained. This is fascinating, as she usually gives the boldest performance in her movies. Her subtlety is, oddly, spectacular. Schoenaerts oozes sex and sadness. For the film to work, we need to fall in love with him, and it worked for me. As for Johnson, at first she seems to be doing a Lolita impression as Penelope. After all is revealed, the impression is impressive, not faulty.

Opens May 20 at Landmark Hillcrest