This show is as absolutely bonkers as it is fabulous 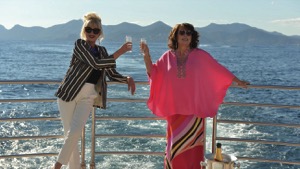 Joanna Lumley and Jennifer Saunders in Absolutely Fabulous: The Movie

In the pantheon of TV series not about gay men that gay men tend to be obsessed with, Absolutely Fabulous is bigger than Designing Women and on a par with The Golden Girls. Almost obscenely popular in the U.K. (with ratings comparable to Cheers at its high point), Ab Fab has more of a cult status in the United States, mostly because of gay men. Ribald, high-camp, and very British, the show is focused on the drunken, drugged and generally debauched antics of PR agent Edina Monsoon (Jennifer Saunders) and fashion editor Patsy Stone (Joanna Lumley). Despite her success, Edina has no self-confidence and relies heavily on her false bravado, theoretical knowledge of fashionable trends, Patsy’s friendship, her deceptively ding-a-ling assistant (Jane Horrocks) and her deeply disapproving daughter Saffron (Julia Sawalha). Patsy relies on drugs, liquor, her slowly fading beauty, and a list of sexual conquests so long it would make the promiscuous gay man blush – or cheer. The show is as absolutely bonkers as it is fabulous; several of its 41 episodes that aired from 1992 to 2012 are among the greatest half-hours of farce TV has seen.

Absolutely Fabulous: The Movie, the feature film that picks up some time after the 2012 episodes, is not as good as any of those classic episodes like “Fashion,” “France,” and “Poor.” No one should expect that it would be. It is, however, an utterly entertaining, often very funny 90 minutes that will help you forget for a time the hideous, violent world of mass murder, global warming and Donald Trump. Well, murder may be a bit hard to forget about, since that’s key to the plot. Still, it’s not a gruesome murder and maybe not a murder at all.

The film opens with Edina discovering that she’s broke and her memoir, her hope for riches, is utterly uninteresting to book publishers. Her only PR clients are (as they have been for years) the ’60s pop singer Lulu, Emma Bunting (better known as Baby Spice), and a boutique vodka. She’s a has-been and dejected and her credit cards are “broken.” Meanwhile, Patsy, who works as an editor for a fashion magazine but relies on Edina to pay for everything, is planning a celebrity-studded party and discovers that the supermodel Kate Moss has fired her flack. Edina hatches a plan, involving her precocious 13-year-old granddaughter Lola, to sign Kate at the party. As things do in the world of Ab Fab, disaster strikes: Kate Moss falls off a balcony into the River Thames, disappears in the dark water, and Edina is blamed for pushing her.

As the world mourns in a perfect parody of celebrity death culture, Edina and Patsy hatch another disastrous plan and then abscond to the South of France in search of a rich husband for Patsy. Throughout the various antics, there are the trademark Ab Fab motifs of gauzy fantasy sequences, inebriated pseudo-philosophical dialogues, mincing queens, parades of hilariously hideous dresses, pratfalls, double-takes and jokes about Edina’s weight, Patsy’s insatiability and Saffron’s dumpiness.

Given 90 minutes, Jennifer Saunders wasn’t forced to be as taut with her screenplay as she had with the series episodes. While the scenes themselves are snappy, the plot meanders. Still, I laughed and loved seeing Saunders and Lumley, comedy geniuses of the highest order, return to these iconic roles. I had fun.