‘Tickled’ is no laughing matter 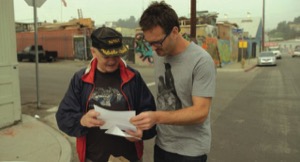 Whether you admit it or not, whether you did it deliberately, you’ve watched some odd sexual stuff on the Internet. Because as the song goes, “The Internet is for porn.” Some fetish videos aren’t surprising, whether it’s feet or leather or women’s panties. But some are, or at least they’re surprising to most people. When David Farrier, a journalist in New Zealand, saw a video of “competitive tickling,” in which strapping young men were held or strapped down and mercilessly tickled by other strapping young men, he thought, well, that’s a story! It was rather funny and odd and perfect for his brand of journalism, which focused on quirky pop culture. But when he sent inquiries to the company, known as Jane O’Brien Media, he received not a polite refusal, but a homophobic screed personally attacking Farrier, who is gay, and threatening lawsuits if he continues with any sort of story. Being the good journalist he is, Farrier was now more interested and more determined, because clearly these tickling videos weren’t just a wacky lark but the project of a weird and somewhat disturbed individual or set of individuals. So, Farrier and his friend Dylan Reeve decided to make a documentary.

The tagline for the film is “It’s not what you think.” This is pretty accurate, because when you hear that the film is about online tickling videos, you might raise an eyebrow and giggle, but that whimsy lasts all of five minutes in the film. Because the threats from Jane O’Brien Media are so creepy, and the story that follows – which include stories of extreme harassment, destroyed lives, criminal fraud, psychopathologies and a creepy-as-hell villain – isn’t funny except in the few moments when people are being tickled and actually seem to enjoy it. Other times, they’re not enjoying it at all, and you realize the tickle videos are actually videos of sadomasochism and torture.

Tickled is structured as a narrative of Farrier and Reeve’s investigation into the videos, Jane O’Brien, the videos’ down-on-their luck actors, the seedy world of fetish videos and the unhinged person who is actually Jane O’Brien. Reminiscent of Nick Broom’s gonzo documentaries Kurt and Courtney and Biggie and Tupac,Tickled feels like it’s just the result of what happened when Farrier and Reeve found a weird topic and bought some cameras. But like Broom’s movies, Tickled is carefully constructed to seem much less professional than it is. The film is built as a thriller and edited – rather strategically – to make sure the villain is villainous and everyone around him either a victim, a lackey or an innocent bystander. I don’t think the various people involved are as naïve or innocent as depicted. But after seeing the film and reading some of the mountains of press about the film, I have been quite convinced the bad guy is pretty bad. He’s been showing up at screenings and bizarrely confronting the filmmakers, stating that Reeve should fear for his children, that both he and Farrier will go to jail. (Unlikely.)

This all makes for good press, but for me, it begs a few questions. Why is the villain so villainous? Why is he so focused on tickling? How is he getting away with it? These questions are asked but never really answered in a satisfying way. The psychological insight into the villain is brief and seemingly tacked on, while the insight into the popularity of tickling videos doesn’t exist. The bait-and-switch of turning a film about tickling into a psychological thriller does create an entertaining experience, but it also left me wondering about the tickling. I mean, that’s pretty weird.

Written and directed by David Farrier and Dylan Reeve