X-Men go from best to worst 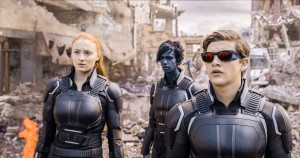 Bryan Singer directed the first two movies based on Marvel Comics’ mutant superhero team the X-Men. Brett Ratner directed the third film, The Last Stand, which is loathed by fans and critics alike. The franchise was then rebooted with Matthew Vaughn’s First Class, and Bryan Singer returned for the second film in this cycle, Days of Future Past, arguably the best of all of the X-Men movies. And now there’s X-Men: Apocalypse, which opens May 27. About a third of the way through Apocalypse, which takes place in 1983, Jean Gray (Sophie Turner), Cyclops (Tye Sheridan), Nightcrawler (Kodi Smit-McPhee) and Jubilee (Lana Condor) are walking out of Return of the Jedi when they start discussing whether it was better or worse than The Empire Strikes Back. Jean Gray eventually says, “At least we can all agree the third one is always the worst.”

I saw Apocalypse on the Fox Studios lot with a few hundred members of the press and various Fox employees, and there was an audible gasp before the nervous laughter. Maybe Singer and screenwriter Simon Kinberg don’t see Apocalypse as the third film after the reboot, though it is. Either way, they were begging the question. Apocalypse is easily the worst of the second trilogy and is debatably worse than The Last Stand. Singer and Kinberg’s hubris is galling in light of the ugly nonsense of the film’s plot, themes and production design.

The film begins 10 years after the end of Days of Future Past. Mystique (Jennifer Lawrence) has become a folk hero to young, rebellious mutants everywhere. Professor Xavier (James McAvoy) has become the head of a school for teenage mutants, who include Jean Gray and Cyclops. Mystique shows up with Nightcrawler and tells Xavier that Magneto (Michael Fassbender), who had gone into hiding, had resurfaced. He had been living in rural Poland, had married and had a daughter, and he was an iron worker who no one knew was the Master of Magnetism. But the locals figured it out and during his arrest they accidentally kill Magneto’s wife and daughter. So Magneto slaughters all of the police officers and sets off to kill some more people.

Magneto is not actually the worst of the world’s problems. From the ruins of a collapsed pyramid, a godlike mutant named Apocalypse (Oscar Isaac) has emerged after a 4,000 year slumber, and he’s pissed. The world he once ruled is now a mess: the late Cold War, TV, rock music and nuclear weapons. He recruits his Four Horsemen to help him destroy the current human race so that he and mutants can rebuild and rule. His horsemen are an angry, grieving Magneto, weather controlling Storm (Alexandra Shipp), winged drunk Angel (Ben Hardy), and psychic knife wielding Psylocke (Olivia Mum). Aside from Magneto, it’s not explained why the others might want to end human civilization, but Apocalypse doesn’t have much of a motivation either. Other than being evil.

The good guys are clearer in their goals: save each other’s’ lives and save the world. How they do this with the interference of the U.S. government is a bit complicated, but after plot twists and some utterly implausible, even for superhero movies, events, the characters all end up in Egypt for a final, boring, incoherent battle between good and evil. Most of the action involves standing and posing or looking grim, and the results are predictable. What isn’t predictable is how the good guys forgive the surviving bad guys’ murder of several hundred thousand people.

I can’t forgive a number of things. The costumes and makeup, from Jean Gray’s hideous aquamarine shoulder padded blazer to Angel’s dreadful mullet, seem to be conceived for a parody of a ‘80s teen comedy. Apocalypse’s purple and gold armor makes him look a bit like Skeletor as dressed by Liberace. As it has been since First Class, Mystique’s red wig and blue skin are horribly done. The various sets, from Charles Xavier’s School for Gifted Youngsters to Apocalypse’s gilded ancient kingdom to the rubble where the final battle takes place, are blandly undetailed.

It’s possible that Singer just wasn’t paying attention to what his staff was doing, though looking at the other work of the production and costume designers, only on X-Men does it look so bad. Singer also doesn’t seem to have been directing much of the action. So confusing and weird, the third act doesn’t seem to have been directed at all, let alone by the same guy who presided over X-Men United and The Usual Suspects. The action is impossible to track, and the actual shots are horribly composed. But considering how many characters were being thrown around, how weak their characterizations were, and how strangely unlike their comic versions they were, badly directed action sequences aren’t the worst thing about the film. That would be Singer and Kinberg noticing how much of a mess Apocalypse is.