Yeah, they’re crude. Get it? 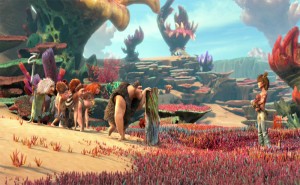 The night before the screening of The Croods, the marvelous animated film about a caveman family overcoming their fear of the world, a friend of mine said, “It’s just going to be a bunch of old jokes stolen from The Flintstones.” I can definitely understand that fear, and I don’t think I could be paid to watch an episode of that show or, shudder, either of the live action films from the 1990s. But the only similarities between The Flintstones and The Croods are the cavemen and a few, small jokes about paleo versions of contemporary appliances. Unlike The Flintstones, which is about a very typical mid-century modern family that happens to live in the Stone Age, The Croods is actually about cavemen: They live in a cave, they’re always hungry, and they’re terrified of everything.

Or, rather, they’re taught to be terrified of everything. Grug (voiced by Nicholas Cage), the father, tells the family a story every night that always ends with someone dying because they went out at night, were too curious, or did something new. Everyone in the family toes this line, except for Eep (Emma Stone), Grug’s teen-age daughter, who is always trying to learn something new and always questioning her father’s instructions. When she sees a flicker of fire in the night, she sneaks out and follows it, finding Guy (Ryan Reynolds), a Cro Magnon to Eep’s Neanderthal (more or less). He tells her — and her appalled and angry father — that the world is ending and they need to head for higher ground, namely a mountain far in the distance. After an catastrophic earthquake destroys the cave, Grug decides to allow his family to follow Guy through the jungles, the deserts, and the swamps.

The Croods, like most animated children’s movies, has a simple lesson, basic conflicts, and stock characters. In this one, we learn that curiosity is better than fear. Uptight fathers need to be patient with their rebellious daughters and not automatically hate the boys they like. And a nurturing, wise wife (Catherine Keener), a dopy brother, a crazy baby, and a wacky, salty grandmother (a wonderful Cloris Leachman) all help this to happen. But within these clichés, writers and directors Kirk De Micco and Chris Sanders have a great deal of witty fun with not just the dialogue but with the visual, mostly slapstick humor. The kids in the screening were howling with laughter; the adults were having a great time, too.

The Croods is not as good as Sanders last film, the now-classic How to Train Your Dragon, which had some similar themes but had more inventive plot. But The Croods is one of the most beautiful animated movies I have ever seen. Instead of using actual pre-historic flora and fauna, De Micco and Sanders, seemingly inspired by Avatar and Dr. Seuss, created everything new, from flying multi-colored turtles and piranha-like sparrows to land whales and two lemurs that share one tail. There are giant man-eating flowers, florescent sequoias, and mollusks that live in the desert. The use of 3-D actually adds to the experience, which is rare. Unlike with the Flintstones, which featured not only bad but ugly animation, I wanted to bask in the beauty of the Croods’ world. Grug would definitely bug me after a while, but I could really get behind the flying turtles.