Zero Dark Thirty is a shark 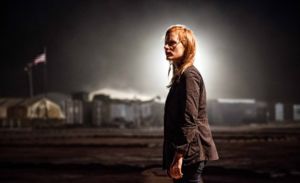 I almost wish I hadn’t seen it.

Zero Dark Thirty, Kathryn Bigelow and Mark Boal’s masterful movie about the manhunt for Osama Bin Laden, arrived in San Diego’s theaters on January 4 with more baggage than any film in recent memory. It was shown to critics in the beginning of December and they went on to give it award after award. Then various pundits and politicians saw it, and many of them claimed to be appalled by what they claimed was the film’s support for torture. Many of them were appalled, in fact, long before the saw it. Because political pundits have a great deal more power to define the national conversation than film critics do, many people had stark opinions, both political and aesthetic, about the film cemented into their brains by the time general audiences were allowed to see it, first in New York and Los Angeles, and now everywhere else.

This is how politics works nowadays; few pundits will allow the facts get in the way of an ideology. Or in the case of Zero Dark Thirty, few pundits were willing to embrace moral ambiguity when moral absolutes are so much easier to explain, and few pundits wanted to differentiate between the representation of an act and an endorsement of it. Many pundits, however, have been willing to ascribe an explicit argument to Bigelow and Boal’s film where none exists. That said, Bigelow and Boal don’t make it easy; Zero Dark Thirty is maddeningly amoral, taking no clear position on torture, revenge, political assassination, or even, I’d argue, terrorism. At the same time, it’s arguably the great cinematic achievement of the last year, an epic thriller edited,and directed with unnerving precision and featuring an almost upsettingly searing performance by Jessica Chastain. That doesn’t mean I liked it.

The film opens with the sequence of scenes that have so upset people. At a CIA black ops camp shortly after September 11, Maya (Jessica Chastain) watches as Dan (Jason Clarke) interrogates a member of Al Qaeda named Ammar (Reda Kateb); Dan is intent, methodical, and remorseless as he beats, humiliates, and water-boards the detainee while trying to elicit information about Bin Laden’s location and plans. Maya is at first uncomfortable with the violence, wincing and turning her head, but over time, she uses the same methods, though not with her own hands. It is when Dan and Maya share a meal with Ammar outside of his cell that he mentions, almost in passing, Bin Laden’s courier. This is the man who, many years later, will lead the CIA to Bin Laden.

Based on some of the moreauthoritative reporting on the actual events, the person Ammar seems to be based on was indeed subjected to “some tough treatment,” but he was not water-boarded. According to the film’s critics, by creating a composite character who is water-boarded and is the initial source for the existence of Bin Laden’s courier, Bigelow and Boal are clearly advocating torture. This is a stretch. In one key scene, they show how Ammar was not actually needed for the discovery of the courier, and throughout, Dan is perhaps the only character in the film – a film that depicts wanton, surgical slaughter – to be depicted as immoral, as a beast. Ammar makes torture untidy in the narrative, but was there anything tidy about American treatment of enemy combatants?

While Dan gives up and returned to Washington, Maya becomes fixated with the hunt for Bin Laden’s courier. The second act of the film focuses on her tireless pursuit of seemingly meaningless leads, her fights with superiors sick of her opinions, and her slow descent into Golem-like obsession. In the third act, she finds the courier and her team tracks him to the house in the northern Pakistani city Abbottabad. Finally, in the 30 tensest, most riveting and most horrifying minutes of film I can remember, a team of Navy Seals (led by Joel Edgerton and Chris Pratt) raid Bin Laden’s compound on May 2, 2011.

Unlike in Homeland and Argo, which are careful, sometimes problematically so, to depict the reasoning of Muslims who oppose American power, Zero Dark Thirty has no interest in the motives of Al Qaeda, the actions of Osama Bin Laden, or even, really, in why we need to destroy either. The film is not a justification of that revenge. It is a thriller with no conscience. Zero Dark Thirty, like Maya, like America in its punishment of Al Qaeda and its supporters, is a shark; it never stops until it finds something to destroy.