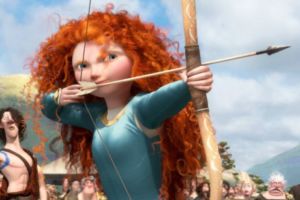 I liked it. But I didn’t really, really like it.

A great deal has been made out of the fact that Brave is the first Pixar movie with a female protagonist. Since Disney has had female protagonists from the beginning – Snow White was released in 1939 – Pixar isn’t exactly breaking new ground. If anything, Brave is the first major American animated film with a feminist female protagonist. Belle in Beauty & The Beast and Mulan were the closest before, and they weren’t very close at all. But Merida, the tomboy teen princess in Brave, is the sort of character many women hoped for after Anne Sexton’s feminist rewriting of Grimm’s fairy tales in 1971 exposed to a large audience the relentless misogyny of Snow White, Cinderella, and Sleeping Beauty.

Merida, unlike previous Disney princesses, does not need a prince to save her, either through swashbuckling or a kiss of true love. Merida is self-assured, bold, courageous, and outraged by the sexist double standards of medieval Scotland. Merida’s story is not about which boy she will love and what hurdles she must jump to be with him. Instead, it is about what her refusal to be married off to a random prince does to her relationship with her mother, a perfect courtly queen whose singular desire is to make Merida the paragon of princess virtues: It is an action-adventure tale about how a traditional mother and a rebellious and visionary daughter reconcile. While the plot doesn’t go as far into feminist fantasyland the way, say, Buffy the Vampire Slayer or Margaret Atwood’s The Blind Assassin did, Brave is the sort of movie that a lot of progressive parents of young daughters will find as thrilling as their daughters do. Even if the film doesn’t have the emotional depth and cinematic wonder of Up or Wall-E, it’s a delightful movie with a laudable message, a combination quite rare this summer.

Merida (voiced by Kelly Macdonald) is the oldest child of King Fergus (Billy Connolly) and Queen Elinor (Emma Thompson), who is determined to turn her daughter into polite, well-read, demure, and courtly princess who will eventually be married off to the next king. But Merida would rather ride her horse through the forest, practice her archery, and climb mountains. When the three oldest sons – all doofuses – of the three clans allied with Fergus come to the castle to compete for her hand, Merida rebels spectacularly. Elinor and Merida have a terrible fight, and they both say horribly mean things to each other. Elinor, being an adult, immediately regrets the fight and feels guilty.

Spoiler Alert: But Merida, being a teen-ager in a fairy tale, gallops away on her expressive Clydesdale Angus, allows some glowing will-o’-the-wisps to lead her to a witch, and then asks the witch to cast a spell on her mother “to make her change.” Merida foolishly thinks the spells will just make Elinor change her mind about forcing Merida to marry one of the clansmen; instead, the spells turns Elinor into a bear. Yes, you read that right. It’s perhaps the weirdest plot twist in Disney history.

The rest of the film follows Merida and her mamabear as they try to reverse the spell. This involves many adventures and one major complication, this being that Fergus lost a leg to a bear that looks a lot like the new, furry Elinor. All ends as you would expect, though happily ever after for Merida is very different from that of Belle and Ariel. Also different: In previous Disney films, a witty heroine is always matched by capable and studly hero. But in Brave, all of males – including Angus but not including Merida’s mischievous triplet toddler brothers – are brutes or dolts or both. This makes for some nice comedy, but it’s not quite feminist.