Bully them into seeing Bully 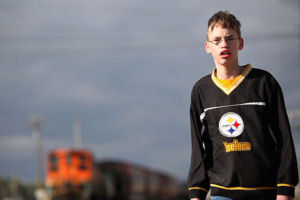 Bully isn’t a movie; it’s a feature-length public service announcement. But it’s one everyone should see. Here’s the link to the review in LGBT Weekly, and here it is also:

Unfortunately, most people only know about the documentary Bully because the Motion Picture Association gave it an R rating for an utterance of the word “fuck,” refused an appeal, and then, following a nationwide outcry orchestrated by the mogul and PR genius Harvey Weinstein, relented and gave the film a PG-13. The rating matters particularly for this film because it is about the bullying of teenagers, and with an R rating not only would it be a great deal harder for teens to get into the movie theater, but few schools would show the film or take students on a field trip to see it. And every teenager in the United States should be forced to see Bully. While it is not a particularly impressive piece of filmmaking, it is extraordinarily effective, and badly needed propaganda for a righteous cause.

The film is quite basic. Director Lee Hirsch follows the lives of three bullied teenagers and the families of two bullied boys who saw no way out but to kill themselves. The dominant narrative is the story of Alex, a 12-year-old boy in Sioux City, Iowa, who is a little awkward and slightly odd looking, as well as enormously sweet and surprisingly articulate. He is also bullied relentlessly by boys on the bus, boys in the gym and boys on the playground, and Hirsch’s footage of the bullying is profoundly upsetting. But Alex is so used to it that he doesn’t even seem to notice how awful it is anymore; he is so used to it, so desperate to fit in, that he doesn’t tell his parents what is going on. An assistant principal at his school, a thick blonde woman bursting with self-importance and a creepily saccharine voice, is in either actual or strategic denial of how terrible the bullying at her school is. And Alex’s parents are confused and frustrated and ill-equipped.

The other stories, while not as well visually documented, are nearly as upsetting. Kelby, an optimistic 16-year-old out lesbian in rural Oklahoma, was hit by a minivan full of jocks screaming homophobic insults at her. Her parents are flabbergasted that their town made pariahs of the whole family. Ja’Maya, an African-American girl in Mississippi, responded to relentless bullying by threatening the passengers on her school bus with her mother’s revolver. She is kept in an adolescent psychiatric ward for five months. The parents of Tyler, a 17-year-old boy who killed himself after years of bullying, open the film, and their quest to get Tyler’s school to do something about bullying allows Hirsch to film school administrators making statements as clueless as they are self-serving. And the Smalleys, also of rural Oklahoma, are shown immediately after their 11-year-old son kills himself. Their grief is so palpable, I was mortified to have witnessed it in amovie theater.

Hirsch’s direction and his team’s editing make the film flow nicely. It is paced well, and the shifting stories are clearly delineated, and Hirsch pulls no punches with filming tears, grief and anger. This is not a movie about bullying as much as it is about the simple emotional reactions of the victims of bullying. There is no examination of school policies, adolescent competition or the social psychology of this kind of emotional and physical violence. Hirsch’s goal is to get you to cry and to get angry and then to cry some more and he succeeds expertly.

I saw Bully at 11:45 a.m. on the day it opened in San Diego, and I was surprised that there were more than 40 people there, and half of them were teenagers or younger, some accompanied by parents. I doubt many kids will willingly pay to see the movie; it will have to be assigned to them. All lesbian, gay, bisexual and transgender people know how profoundly traumatic bullying is. Those of us who survived don’t need to be persuaded that teenagers need to be taught to treat each other with respect and kindness. But we need to ask, demand, and maybe bully teachers and administrators at junior high and high schools to make sure their students see what they are capable of.