Don’t go in the basement! 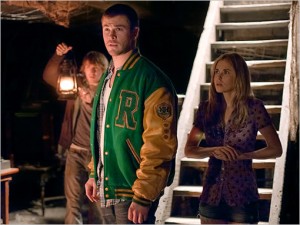 OMG. I loved The Cabin in the Woods. It was all Whedonesque and awesomesauce. I dunno when it will appear on the LGBT Weekly site, so here’s my review.

If you’ve seen the ads for The Cabin in the Woods, I think you may have the impression that it is the same old horror movie: a group of sexy, stupid, and doomed young people go to the woods for a weekend of liquor and sex and they get attacked by creepy things wielding big knives. That movie has been made before, and you’ve seen it. But there are some quick glimpses in the ads of some things that don’t fit in the traditional hack-and-slash-in-the-woods film. You see a room full of computers, and some technicians are fiddling around with knobs and keyboards and on monitors above them, we see the nubile victims. They’re being watched, and maybe their fates are being controlled by these nerds. This makes the movie a little bit different, because it’s not a lone nut pulling the strings, as in Saw, but rather something like NASA.

But the ads don’t tell you much, and per the request of the film studio, I’m not going to tell you much about what’s really going on. But I will tell you something very important that the ads don’t seem to want you to know: The movie was co-written and produced by Joss Whedon, the man who gave us Buffy the Vampire Slayer and Angel and Firefly. I’m not sure why anyone would underemphasize something like that, since Whedon has a cult-following of fanboys and a bigger-than-a-cult-following of people who like their fantasy and sci-fi witty, wise, weird, and full of fully realized characters. The Cabin in the Woods was co-written and directed by one of Whedon’s protégés, Drew Goddard, who wrote for both Buffy and Angel as well as for two other major fanboy touchstones, Alias and Lost.

Of course, pedigree isn’t everything. But in this case, it’s a great predictor, because Whedon and Goddard’s movie is simply awesome. It’s scary, gory, and thrilling, as all horror movies should be, but it’s also ingeniously, surprisingly plotted and as funny as the best of Buffy and Angel ever were. That the five kids being chased by knife-wielding zombies is connected to, and caused by, the people in the NASA-like control room is established within the first 15 minutes, but it takes the whole film to explain why. And in that hour and a half, we are treated to bloody fighting, hysterical conversations, and jaw-dropping plot twists.

As usual, Whedon’s great casting serves him well. The five kids are played by the wanly beautiful Kristen Connolly, a slightly less roided out Chris Hemsworth (who is better known as Thor), a constantly baked but oddly wise Fran Kranz (who was in Whedon’s short-lived series Dollhouse), Jesse Williams (from Grey’s Anatomy), and Anna Hutchison (the yellow Power Ranger). Connolly has to carry the movie, and she has never had this big of a role, but she does it with the same kind of unexpected surety that Sarah Michelle Geller did the first season of Buffy. The control room is staffed by Bradley Whitford (The West Wing), Richard Jenkins (Six Feet Under), and another Whedon vet Amy Acker (Angel, Dollhouse). Whitford and Jenkins both crackle as wise-cracking semi-competent apparatchiks, and that makes their true goal so much more shocking.

And I still can’t tell you what is really going on. But I’ll give you some hints: It was clearly inspired by Wes Craven’s Scream, Sam Raimi’s Evil Dead, Lost, and The Truman Show, and Whedon and Goddard also drew from their own work on Buffy and Dollhouse. But the movie is not at all derivative; it is both using and commenting on the influences. The dialogue and the themes are unmistakably Whedon, and that is a great thing.