Hobbits, Slaves, and the French

There are way too many movies released in December. Luckily, most of them are the good ones up for awards consideration.

Last week, the San Diego Film Critics Society, of which I am a member, chose Argo as the best film of the year. It also won best director (Ben Affleck), best adapted screenplay (Chris Terrio), and best editing (William Goldenberg).

While that movie was released more than two months ago, many of the movies that we nominated for multiple awards were released in the last few weeks or haven’t even been released yet. So, I have been to a lot of review screenings and watched a lot of special “For your consideration” DVDs. I have seen some amazing films. But it’s frustrating that so many of the good ones all arrive at the same time. It’s hard to see all of them and give them their due. And it’s why I’m reviewing three new movies this week instead of just one.

The Hobbit: An Unexpected Journey opened last week. While the three books that comprise The Lord of the Rings were actually sequels to The Hobbit, this film’s release comes nine years after that trilogy of films ended with The Return of the King (which won 11 Oscars including Best Picture), so The Hobbit seems like a prequel.

Or rather, three prequels, since it’s being broken into three movies, with the next two opening in December 2013 and December 2014.

How a 333-page book can be turned into three 3-hour films is hard for me to understand, but that’s what director Peter Jackson has decided to do.

It certainly will allow Warner Bros. to make a zillion dollars, but it doesn’t serve the story.

An Unexpected Journey is unnecessarily long; it takes nearly 45 minutes to get the cast on the actual journey, and by the time our hero the hobbit Bilbo Baggins (Martin Freeman), the wizard Gandalf the Grey (Ian McKellan), and 13 dwarves led by exiled King Thorin (Richard Armitage) make their way, it’s less unexpected than overdue.

That said, the padding only feels padded when you look at your watch. Jackson and his screenwriters seem incapable of crafting a dull scene. The slowest are the ones that involve the humorless and blank elves, but those are very few.

Mostly, it’s hapless but increasingly brave Bilbo, wise and wizened Gandalf, and the wildly entertaining dwarves fighting trolls, goblins, orcs and giants while on a long trek to the Lonely Mountain, where the dwarves lived before being expelled by a gold-hungry dragon.

While the profundity of the themes in The Lord of the Rings makes it hard to surpass, An Unexpected Journey is just as stunningly beautiful as those three films and features action sequences just as thrilling. All of this is enhanced by Jackson’s expert use of 3D; it’s worth the extra money. 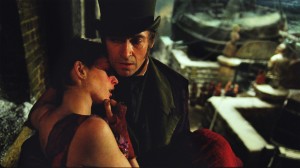 Les Misérables opens on Christmas, and it is as eagerly awaited as The Hobbit, if for very different reasons. Based on Victor Hugo’s classic 1862 French novel about an ex-convict struggling to overcome his past (among several other plots), themusical version of Les Misérables is one of the few Broadway blockbusters that is as good as it is popular.

Hooper decided to have the actors sing during their scenes instead of lip-sync to a pre-recorded soundtrack, and the result is performances that are much more intimate and much more powerful than those in any musical film in recent memory.

With the exception of strangely confused and vocally outclassed Russell Crowe, the entire cast is stellar. Hugh Jackman is best known for being an action hero, but he became famous as a musical theater star, and he has a crisp, gorgeous tenor voice. And as Jean Valjean, he has never had as great a role on film and he has never been better: anxious fear, righteous anger and deep and visible empathy.

Anne Hathaway, as the doomed prostitute Fantine, is wrenching in her stunning, agonizing performance of “I Dreamed A Dream.” It is a performance that will be remembered for decades. Samantha Barks, who is barely known in or out of the United Kingdom and who looks a great deal like Ginnifer Goodwin, plays Eponine, the peasant girl in the key love triangle, and she will become a star because of it, not the least because of her fabulous rendition of “On My Own.” 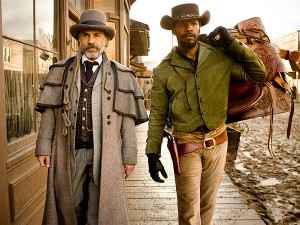 Tarentino’s homage to spaghetti westerns and blaxploitation films of the 1970s is his funniest movie by far and as nearly as fun to watch as Kill Bill Vol. 1. It’s also the movie that probably sets some sort of record for the use of the n-word.

Tarentino loves that word for some reason, and every character in the film utters it in almost every sentence. (Except, very interestingly, for the character Tarentino briefly plays, who uses “blackie” instead.)

Granted, it takes place a decade before the Civil War, and it’s about a slave named Django (Jamie Foxx) who is freed by an intellectual German bounty hunter named Dr. King Schultz (Christoph Waltz). They team up first to kill bounties and then to save Django’s wife Hildie (Kerry Washington) from a most evil plantation owner (Leonardo DiCaprio).

You would expect the n-word to be in use often in a story revolving around a freed slave taking revenge on white slave owners. Still, it’s disconcerting to modern ears, especially with Tarentino’s history of using it for shock value and thus getting flack from black directors like Spike Lee and Tyler Perry.

While half of the brilliance of Django Unchained is Tarentino’s direction and screenplay, the other half is clearly Robert Richardson’s cinematography, which makes everything from lantern light to explosions of blood beautiful. Perfect for Christmas.