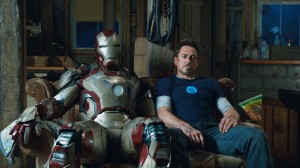 Can we talk about Robert Downey, Jr.’s beard for a minute? It’s not quite pencil thin, but it’s distressingly narrow, a strip that connects tweezed sideburns with a manicured mustached and a chin strap. It’s decidedly not fashionable; the look really hasn’t been hip since the late 1990s, which is when the third installment of Iron Man opens. It was douchey at the turn of the century (when that insult wasn’t really in use), and it just looks bad now. I’m not entirely sure why I am so focused on how awful Downey’s beard is. Overall, it was just a minor part of why he bugged me so much in the movie. I guess it’s partly because I’m bear and prefer real beards, but partly it’s because Downey spends disappointingly little time in his armored suit, and his face and awful beard are on full display: It turns out Iron Man 3 is less of a superhero movie and more of an action movie vehicle for Robert Downey, Jr. and his trademark, and to me, increasingly irritating, shtick.

The movie opens with a flashback to 1999, when pre-Iron Man billionaire industrialist Tony Stark (Downey) picks up a promising botanist named Maya (Rebecca Hall) and rudely ignores a decrepit, limping scientist named Aldrich Killian (Guy Pearce). Thirteen years later – a few months after Iron Man and the Avengers battled aliens and a cranky Norse god in New York (as seen in Joss Whedon’s awesome The Avengers) an event that has inexplicably made Tony prone to panic attacks – Killian shows up again, perfectly healthy, and tries to convince Tony’s girlfriend and the CEO of his company Pepper Potts (a fierce Gwyneth Paltrow) to partner on his future research. Meanwhile, a Middle Eastern terrorist called the Mandarin (Ben Kingsley) is setting off bombs and killing Americans willy-nilly.

When one of the Mandarin’s blasts hurts Tony’s trusted bodyguard Happy Hogan (John Favreau, who directed the first two Iron Man films), Tony is enraged and challenges the Mandarin. And the Mandarin does, sending a three helicopters to destroy Tony’s Malibu mansion, seemingly killing our hero. Of course, Tony survives, and his entertaining, if lengthy, quest to get the Mandarin leads Tony to Aldrich, Maya, Tennessee, a cutesy friendship with a young boy (Ty Simpkins), several glowing bad guys (led by the criminally underused James Badge Dale), Miami, and a massive Michael Bay-ish fight above an oil tanker alongside Tony’s brother-in-another-suit-of-armor Col. James Rhodes (Don Cheadle).

The plot is, to say the least, involved, though most of the mystery is pretty easy for the audience to figure out long before Tony and Pepper do. However, there is one twist that is slightly surprising, utterly delightful, and it allows at least one member of this outrageously talented cast (that also includes Miguel Ferrer and Dale Dickey) to go for a Golden Globe nomination. This twist has enraged comic book fanboys, but I’m not sure which is more entertaining, their geek outrage or the object of their ire.

As a long-time fan of the Marvel Comics universe, I was unconcerned about the change of an established, but minor character, especially since writer-director Shane Black did it so well – and it’s the best part of an impressively witty script. I was much more irritated that, unlike every other Marvel film, from Spiderman to the X-Men to The Avengers, the iconic character being played in Iron Man is subservient to the star’s persona. Downey, once considered to be the great actor of his generation, has become a lazy ham, playing a vaguely different version of the fast-talking, sarcastic cad in every film, whether it’s the Iron Man and Sherlock Holmes franchises or broad comedies like Due Date. Call me a fanboy, but just like that terrible beard, that character is distractingly wrong for Tony Stark.