“I want to go on adventures, I think.” 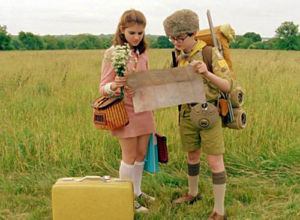 I think I may love Moonrise Kingdom more than any other Wes Anderson film.

Sam Shakusky, the hero of Moonrise Kingdom, is an awkward 12-year-old boy. An orphan living in a foster home for troubled boys in 1965, he is the only one who doesn’t look like an extra in Rebel Without A Cause. Tough guys, the other boys are all in white T-shirts and blue jeans and their hair is greased into a perfect sheen. But Sam has a mop of black curls and a tiny frame and is as weird and precocious as the other boys are conforming. He’s the sort of kid who, when asked what he wants to do when he grows up, says, “I want to go on adventures, I think.” This makes him endearing to me, but to others he’s just off; when Sam’s scout leader calls the foster home to say that he’s run away from camp, Sam’s foster father says that he doesn’t want Sam to return.

In the incredibly arch Moonrise Kingdom, where writer-director Wes Anderson laces most intense emotions with irony, this moment is so awful, the audience laughs in discomfort, but the three adults listening to the foster father – Scoutmaster Randy Ward (Ed Norton), local cop Captain Sharp (Bruce Willis), and the phone operator – are visibly, indelibly saddened. Like in Roald Dahl’s children’s stories, in Moonrise Kingdom both humor and pain, and irony and sincerity exist side-by-side. The result is a profoundly entertaining and also profound film that matches and perhaps surpasses Anderson’s best achievements, which include the minor classics Rushmore, The Royal Tanenbaums, and The Fantastic Mr. Fox, which was based on a Dahl story.

The camp that Sam runs away from is on the island of New Penzance, a fictional place that resembles a New England summer colony. The only people there are vacationing families, scouts and a few people who live there year-round, like Captain Sharp. Sam runs away to go on an adventure with a girl he met the previous summer and became pen pal lovers. Suzy Bishop (Kara Hayward) is as off as Sam, but while Sam is nerdy and odd, Suzy is angry and depressive. Her parents Laura and Walt (Frances McDormand and Bill Murray) are reading a book of dealing with a disturbed child; when Suzy finds the book, she gets more disturbed.

Most of the film revolves around the search for Suzy and Sam, with Captain Sharp, Laura and Walt, and Randy and his motley crew of Khaki Scouts combing the island. Meanwhile Suzy and Sam hike, canoe, hang out on the beach and listen to records. The dialogue between the two children is hilarious in its precocity. Suzy tells Sam that she wished she were an orphan. “I think your lives are more special,” she says. And Sam responds, “I love you. But you don’t know what you’re talking about.”

There are several subplots. Randy wants respect from the chief scout master, played by Harvey Keitel. Laura is not-so-secretly having an affair with Captain Sharp. Walt is frustrated with life. And the film’s narrator (Bob Baleban) is foreshadowing a huge storm that hits the island during the film’s third act.

Anderson’s direction of his and Roman Coppola’s ingenious, intricately plotted script is a marvel. There are some scenes that are so beautifully set that the still images of them could alone be hung on the walls of a museum. Every prop, each bit of blocking, and all of the art direction is carefully and specifically stylized, inspired, it seems, by vintage Boys Life and Norman Rockwell paintings. I want to go see the film again just to gawk at the smart animal costumes for a Noah’s Ark church pageant, or at the scouts’ campground, the Bishop’s house floorplan, and Captain Sharp’s trailer. And I want to catch more of Sam’s dorky witticisms, which not surprisingly made Suzy fall in love.