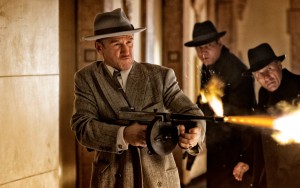 This one just pissed me off.

People complained that free blacks were given short shrift in Lincoln, that the Canadians had more involvement in the escape from Iran that depicted in Argo, that Alfred wasn’t as cartoonish as he was shown in Hitchcock, and torture was over-emphasized in Zero Dark Thirty. But so far, there hasn’t been too much buzz about the how Gangster Squad is about as historically accurate as Inglorious Basterds, the moviein which American troops are the ones who kill Hitler and Goebbels. (They committed suicide.) But Gangster Squad is still able to say it was “inspired by a true story” about an elite group of LA cops tackling gangster Mickey Cohen.

Unlike Tarantino’s movie, Gangster Squad is not a post-modern revenge fantasy commenting on World War II films and mythology. No, Gangster Squad rewrites history simply because the truth isn’t as marketable as the lie. Bloody, vicious, impossible violence brings in an audience raised on first-person shooter video games, taught to glorify violent retribution, and immune to thinking about to how hyper violence in the media just might be connected to real world gun violence.

Rather famously, a scene in Gangster Squad, in which a movie theater is riddled with machine gun violence, was cut from the film because of the Aurora shootings. Don’t let that fool you into believing that its producers have a moral center: they left in a mass shooting and bombing killing scores of pedestrians in Chinatown, a mass shooting of pedestrians in front of a night club, a mass shooting of gangsters in and in front of the Plaza Hotel, and the grisly murders of two people who displeased Mickey Cohen, one literally torn in half by two cars and another killed by a power drill to the brain. The next shot immediately after this blood spatter is a close-up of cooking hamburger. Most of these events never happened.

This kind of violent content can be filmed effectively. Spielberg and Scorsese show it as realistically horrifying, and people like John Woo, Quentin Tarentino, and the Wachowskis can make it look beautiful. But director Ruben Fleischer, best known for making the delightful horror comedy Zombieland, has no such skills. The violence is just there, being violent, pandering to a bloodthirsty audience expecting the worst of the cops and killers genre.

What I find weird about this is that on paper Gangster Squad is not that kind of movie. It stars three of the best actors working today, men who usually don’t appear in schlock. But here they are, being bad. Josh Brolin plays a one-dimensionally gruff World War II veteran named John O’Mara who refuses to become a dirty cop and is chosen to take down Cohen because of it. Ryan Gosling is his cynical, lothario deputy; he plays Jerry Wooters as a gun-toting version of his Crazy Stupid Love seducer. And Sean Penn does a suitable imitation of Dr. Evil and Cody Jarrett’s love child as Mickey Cohen. The movie also stars such luminaries as Emma Stone, Mireille Enos, Nick Nolte, Anthony Mackie, Robert Patrick, Michael Pena, and Giovanni Ribisi. None of them will be hyping Gangster Squad on their otherwise impressive resumes.

To be fair, the violence, the lies, and the mediocre performance aren’t the main reason the film fails. Rather, it is the confusing and unsure tone of the film. With the period clothes and sets (and especially the classic LA landmarks of the 1950s), Fleischer has styled the film as a neo noir film, almost an homage to LA Confidential, whichis itself an homage to movies like Double Indemnity. But then it seems he’s parodying, even mocking, the genre, particularly with Gosling and Brolin’s quotations of Burt Lancaster, Humphrey Bogart, and Cary Grant, and with Stone’s vamping of Lana Turner and Veronica Lake. But it’s equally possible Fleischer is simply doing noir, but ineptly. As hideous as the film’s violence is, it’s memorable, while the rest is just sad imitation.