Vampires fought on the side of the South. Of course. 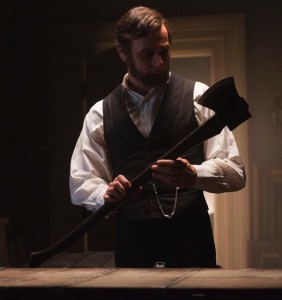 This will run next week.

If you’ve been to the movies over the few months, you may have seen a preview for Abraham Lincoln: Vampire Hunter and been one of the hundreds of thousands of people to laugh out loud while saying something to the effect of “What the hell?” It’s an apt response to what is probably one of the strangest premises for a big budget summer action film. Based on the popular, and very postmodern novel of the same name, the film follows the life of our 16th president: the murder of his mother by a vampire, his training as a vampire hunter, his courtship of Mary Todd, and, at the film’s climax, the Battle of Gettysburg, which, in this world, was actually fought between the North and a bunch of long-fanged undead in gray uniforms. Directed by one of the masters of slow-motion combat Timur Bekmambetov (Wanted), it stars Ben Walker (Meryl Streep’s son-in-law) as Lincoln and a typecast Rufus Sewell as his slave-devouring arch nemesis Adam. The movie is knowingly ridiculous, from its premise to the balletic fights and the hilarious rewriting of history. But in that ridiculousness is whole hell of a lot of fun.