This dark side of suburbia is somewhat unoriginal 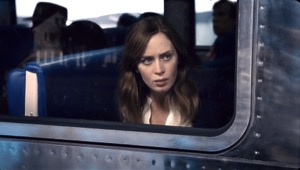 Emily Blunt in The Girl on the Train

In novels, I love unreliable narrators. I find the precarity of the truth titillating, even thrilling, especially as I slowly discover that what I’m reading isn’t to be trusted. I become a detective, looking for clues to what is really going on. It’s why I love Nabokov’s Lolita and Pale Fire, Peter Cameron’s Andorra, and, in recent years, Ian McEwan’s Atonement, turned into the excellent film directed by Joe Wright. But as great as Wright’s film is, the revelation that the narrator isn’t reliable is so much less powerful than it is in the book, because we don’t imagine her crafting the images that we see; in the book, it’s clear that every word is hers, so every lie is hers. In the adaptation of Paula Hawkins’ massive bestseller The Girl on the Train, a novel with three unreliable narrators, director Tate Taylor has a similar problem: How does he thrill us with precarity of truth? If he’s too subtle, people will be confused. If he’s too blunt … well, there’s no if. He and screenwriter Erin Cressida Wilson decided to be as blunt as the rock used to commit the murder at the center of the novel.

Emily Blunt (see what I did there?) plays Rachel, the titular character. She takes the train back-and-forth from the Hudson River suburbs of New York to Manhattan every day. One house she passes is occupied by beautiful Megan (Haley Bennett) and her husband Scott (Luke Evans), and she imagines and fantasizes about their perfect romance. It’s pretty clear from the audience’s perspective that Megan doesn’t look too happy, and then we realize that Rachel isn’t either and, in turn, is always drunk; she keeps vodka in her water bottle, slurs her words and wobbles when she walks. And she makes many, many mistakes, like deciding to get off the train to visit her ex-husband Tom (Justin Theroux) and his new wife Anna (Rebecca Ferguson), with whom he cheated on Rachel and with whom he now has a baby, which Rachel could never give him. Oh, they live next door to Megan and Scott. Megan looks a lot like Anna; Megan, to alleviate boredom, is a part-time nanny for Anna and Tom.

One day, Rachel is particularly drunk and decides to get off the train and stumble toward Tom and Anna’s house. Suddenly, it’s the next day, and she’s in her apartment, filthy and covered in blood and bruises. And Megan is missing. Immediately, both Rachel and everyone in the audience wonder if Rachel killed Megan, having confused her with Anna. Rachel, because she makes bad decisions both drunk and sober, decides to insert herself into the investigation, convincing Scott that Megan was having an affair with her therapist, which accidentally convinces the police that Scott might be a murderer. When Tom and Anna see Rachel hanging around, they repeatedly tell her to stay away, that she’s a crazy drunk, and so on and so forth. Flashbacks, sex scenes, plot twists ensue, and eventually the various scenes are shown in a different way, making it as clear as a bell that Rachel, Megan and Anna are all lying to themselves or have been lied to. None of it makes full sense until the last ten minutes, when the climactic revelation is accompanied by ham-handed symbolism so ridiculous the screening audience I saw it with guffawed.

To be fair, The Girl on the Train is suspenseful enough and handsomely made enough to be entertaining, in a Lifetime movie sort of way. But its themes concerning the dark side of suburbia are so obvious and so unoriginal that Lifetime seems like the only place such a film would seem shocking. Both Theroux and Evans are fine (in performance and looks), but they exists as symbols, not characters. The cold vapidity of both Bennet and Ferguson don’t create any sort of sympathy or antipathy, and Blunt’s performance of drunken clichés is so over-the-top as to be, more than not, laughable. An unreliable narrator should give you chills, not the giggles.

The Girl on the Train

A whole bunch of movies every queer boy should see

Last weekend, I was hanging out with a sweet young faglet, and it became clear that many of my boyfriend and my film references were flying over his head. I take my queer culture and queer acculturation seriously, so while we were all watching Victor Victoria, I set out to write a list of a movies that every queer boy should see. It got long.

Almost 20 years ago, an older gay man made a similarly themed, though much shorter, list when I said that I had never seen All About Eve. This was after he had recited the entire opening monologue from memory. He had just used it in a promo he’d written for WGBH, where he wrote, among other things, Vincent Price’s banter for Mystery. He was what was called a “non-resident tutor” at my college residence house, and he came to dinner a couple times a month and sat with the gay resident tutor and told stories. Oh, the stories!

I’ve always found exceptional value in the words, wisdom, wit, and stories of older gay men. Queers are rarely raised by other queers, so when we come out, we have no culture. We have to learn it. And gay culture is rich, weird, and intensely important. It’s also, contrary to Andrew Sullivan and Daniel Harris, not remotely dead. END_OF_DOCUMENT_TOKEN_TO_BE_REPLACED