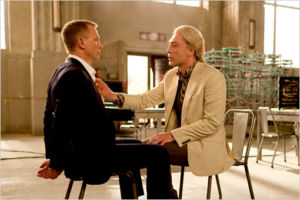 I need a martini. And a cigarette.

In 2006, Casino Royale saved the James Bond franchise, ending the redundant self-parody that had characterized the movies since Moonraker in early 1979. Two things happened. Following the amazing success of the grimy, naturalistic, and nearly effects-less Bourne Identity, director Martin Campbell made Casino Royale as gritty and physically possible as the previous film, Die Another Day, was plastic and absurd. But probably more important, Daniel Craig was cast as Bond. END_OF_DOCUMENT_TOKEN_TO_BE_REPLACED

I meant to post these reviews, but I forgot.

Over the last few weeks, I’ve spaced on posting my movie review here, even though I’d been writing them and they kept appearing in print. In reverse chronological order of the movies that haven’t been blogged.

I really wanted to like Cowboys & Aliens. Oh, well.

When I first saw the poster for Cowboys & Aliens,I got excited. These are two great tastes that haven’t yet gone together, but should. Five years ago, that’s what I said about chocolate and bacon. Now you can buy bacon chocolate bars everywhere. (Well, maybe not everywhere. But soon, I hope.)

Two of the great American film genres, the Western and the sci-fi action film, seem incongruous, even odd together, but they have a great deal in common. Both the Western and the sci-fi action film are, often, about honorable underdogs who must fight evil in the form of the corrupt (evil cattle barons or the Galactic Empire), the criminal (bank robbers or super-corporations of the future) or the racial other (Indians or green reptilian monsters from a distant solar system). Mixing the two genres would give the filmmakers all sorts of interesting material to work with, crazy juxtapositions and surprising plot twists. Or not. [Read the rest here.]

I was dumbfounded by how much I loved — by how good — Captain America was.

Captain America: The First Avengerdebuted in San Diego last week at a screening full of both comic book geeks here for Comic-Con and local soldiers, sailors and pilots in fatigues and pressed blues. Both groups were thrilled when a troupe of dancing girls decked out like Rockettes from the 1940s performed at the front of the theater; they got a lot more cheers than Chris Evans, who plays the Captain and who showed up to tell everyone how much he loves the movie.

With that much fanfare, anything less than an exciting, enjoyable, morally simple and beautifully shot action film would have been a disappointment. No one was disappointed; I certainly wasn’t. [Read the rest here.]

Tabloid really disturbed me, and I’m one of the maybe three people who had a lot of issues with the movie.

Tabloid, the latest documentary from Oscar-winner Errol Morris (The Fog of War, The Thin Blue Line), couldn’t have arrived at a more appropriate moment. While Britain is immersed in an epic scandal involving the relentless, creepy and illegal overreach of its most popular tabloid newspaper The News of theWorld,Morris’ film showcases a sex scandal that provided cannon fodder for Britain’s tabloid wars almost 35 years ago.

The unintentional irony of Morris’ film is that he focuses on the tabloidy, if amazing and hilarious, aspects of the story – its protagonist’s delusions, the almost impossible-to-believe details and the sex, sex, sex – while glossing over the enormously shady ways that the tabloids used and abused the people involved in the scandal. Joyce McKinney, the colorful, charismatic, sexy and maybe a little crazy center of it all, ends up as fodder for Morris, too. As she was in 1977, McKinney is an expendable casualty in the service of a story told for profit. [Read the rest here.]

Transformers: Dark of the Moon was ridiculous.

I’m not sure why anyone needs to watch, let along make, 157 minutes of a third movie based on Hasbro’s popular toys known as Transformers. But Transformers: Dark of the Moon,the latest in the series of action movies about morphing robots from outer space, is more than two and a half hours long. With a reported budget of $195 million, director Michael Bay and executive producer Steven Spielberg have spent $805,000 for each minute of computer generated robots attacking each other, chunks of the Chicago skyline and the various humans unlucky or dumb enough to get in the way.

If you are the kind of moviegoer who is happy, even gleeful, about paying $16 to see Michael Bay’s special effects bonanzas in 3-D, then you will need to see, and may love, Dark of the Moon. It is by far the best of the three movies, and yes, that is damning it with faint praise. If you don’t compare it to other Bay movies, but rather to the work of his genre-mates like James Cameron, Peter Jackson and Spielberg, Dark of the Moon is a bombastic, occasionally fun to look at, but still craven piece of schlock. [Read the rest here.]