The family that fights mercenaries and fascists together stays together

Part of why people loved Guardians of the Galaxy so much when it came out in 2014 was how surprised they were: The Guardians are not well-known characters outside of diehard Marvel Comics fans; no (at-the-time) major starred in the movie and few knew of writer-director James Gunn beyond his screenplay for Scooby Doo.

There was not much to expect. But Guardians of the Galaxy was a massive hit because it was thrilling, funny, nerdy and it featured Chris Pratt’s arrival as a major star. It’s considered by many to be the best or at least one of the best Marvel movies. So, Guardians of the Galaxy, Vol. 2 had a lot to live up to. And while I couldn’t be pleasantly amazed again, I was still impressed by how much fun I had. The movie does all the things tent-poll comic book movies are supposed to do while doing something very few of them manage: be completely character driven.

The Guardians are comprised of their wise-cracking, Earth-born captain Peter Quill, or Star-Lord (Pratt), green-skinned and humorless warrior Gamora (Zoe Saldana), rascally racoon-looking Rocket (voice by Bradley Cooper), oafish strongman Drax (Dave Bautista) and the tiny, talking tree toddler known as Groot, whose only words are “I am Groot.” (The phrase can mean anything and only Rocket knows how to interpret it.) The film begins with the Guardians killing a space monster for a gold-skinned race of fascist humanoids called the Sovereign in return for a prisoner of theirs: Nebula (Karen Gillan), the angry, blue-skinned sister of Gamora .

But as the Guardians leave the planet, the Sovereign attack; they are enraged when they discover Rocket has stolen a few of the Sovereign’s super-powered batteries. The Guardians escape but only because a mysterious, absurdly powerful man named Ego (Kurt Russell) incinerates the Sovereign ships. It turns out Ego is Peter’s long-lost father – who is also a millions-of-years-old god-like being called a Celestial. As Peter bonds with his dad, Gamora and Nebula fight, Drax has hilariously deep conversations with Ego’s empath companion Mantis (Pom Klementieff), while Rocket and Groot deal with the bounty-hunters and pirates called the Ravagers and their erstwhile leader and Peter’s former guardian Yondu (Michael Rooker).

There are a lot of characters and a lot of plot threads, and Gunn handles them expertly. He develops each character, giving them motivation, conflicts and almost complex emotions. The plots are created by the characters working to resolve these emotionally oriented problems, almost all of which revolve around how they create and sustain their families. In each case, these tough and rough heroes are resisting the connections right in front of them and seeking out the wrong goal, and they confront this error when they must fight a bunch of bad guys all at once. It’s a surprising moving and surprisingly sweet plot for a movie full of space explosions and weird-looking aliens.

The soundtrack is full of hits of the 1970s (ostensibly all found on Peter’s cassette tape Awesome Mix Vol. 2), and they are not used as ironic background noise but as commentary on the action: from “Brandy (You’re a Fine Girl)” by Looking Glass to “Father and Son” by Cat Stevens, from “My Sweet Lord” by George Harrison to “The Chain” by Fleetwood Mac. “Brandy” is used particularly powerfully, with Ego explaining that he is like the sailor in the song: “But he made it clear he couldn’t stay / No harbor was his home.” It’s a romantic notion, but it’s also a sad one.

By the end, Peter realizes that nothing can replace the loss of his father, not even a God. But a family of space swashbucklers might come close. 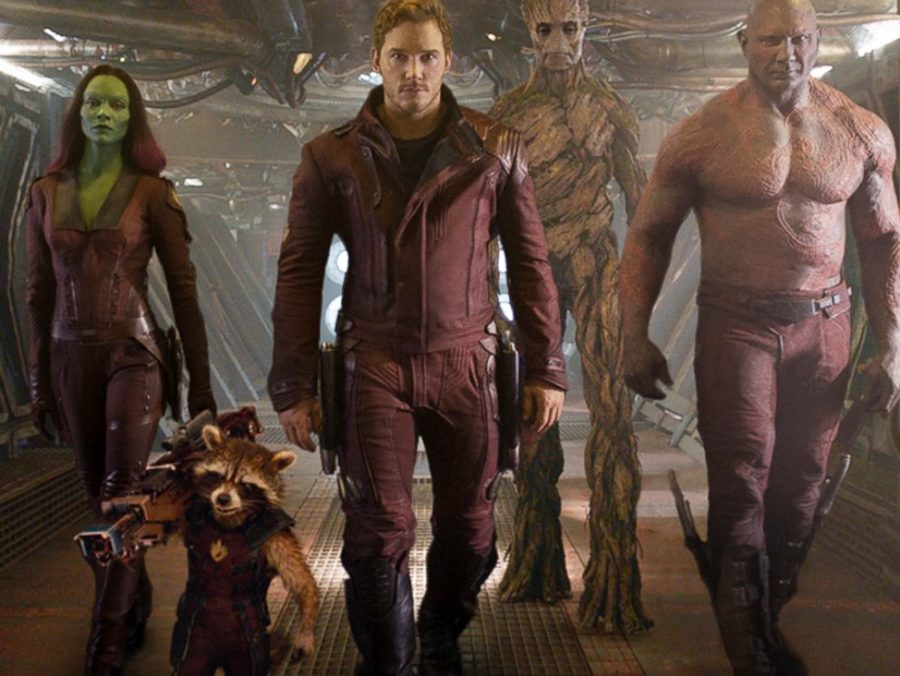 I must admit that the biggest reason I was so excited to see Guardians of the Galaxy was Chris Pratt. I’ve been a fan since he guested as trustafarian college student on The OC in 2006, and I developed a silly school boy crush on him in Parks & Recreation, on which he’s played adorable dimwitted man-child Andy Dwyer for seven years. For much of his career, he’s carried some chunk, earning more than a few bear fans. After he was cast as a Navy Seal in Zero Dark Thirty, he started working out, and suddenly he went from dopey comedic sidekick to leading man, getting cast as the lead in the next Jurassic Park film and as Peter Quill, or Star-Lord, in Marvel’s massively budgeted space opera Guardians of the Galaxy.

I’d probably pay to see Pratt eat cupcakes for two hours, but I was quite happy when Guardians turned out to be hugely entertaining. It is not, however, deserving of the extreme adulation it has been receiving. Three days after its release, the voters on IMDb have declared it the 32nd greatest film of all time. This is, of course, absurd. Fanboys can get overexcited, and they can also develop blinders, not noticing the flaws in their obsessions.

Perhaps one of the reasons so many people loved Guardians is that, unlike Spider-Man, the X-Men, or Captain America, the Guardians of the Galaxy are not a group of superheroes so well known that any filmed representation of them is bound to be sneered at by legions of comic readers whining, “That’s not right! Star-Lord’s mom didn’t die that way!” (I uttered that sort of whine in my review of the latest X-Men film a few months ago.) In fact, a lot of people were perplexed that Marvel would make a movie based on characters that weren’t already a worldwide brand. With the $200 million budgets, that’s a risk, especially without a superstar to carry the film, like Robert Downey, Jr. did for Ironman. The risk paid off, however.

The film opens with Peter as a young boy. He is sitting alone in a hospital waiting room, listening to a mixtape on his Walkman. He is ushered into a hospital room, where his mother is dying. Peter is confused and scared, and after she succumbs, he runs from the hospital in tears. Suddenly, a space ship appears and beams Peter up. Twenty-six years later, Peter is played by Pratt, and he is on a strange, barren planet. In a scene more than a little reminiscent of the opening of Raiders of the Lost Ark, Peter is searching ancient ruins for an artifact: a mysterious metal orb. So are a bunch of other mercenaries and evildoers (played by Michael Rooker and two-time Oscar nominee Djimon Hounsou), and Peter barely escapes with his life.

While he tries to sell the orb on the planet Xandar, two bounty hunters, the furry Rocket Raccoon (Bradley Cooper) and hilariously taciturn and wooden Groot (Vin Diesel), and green Gamora (Zoe Saldana), one of the henchmen of the evil Ronan (Lee Pace), attack Peter to get the orb. Instead, they all end up on a prison planet, where criminals and enemies become allies and heroes. Along with the super-literal muscle man Drax (Dave Bautista), they break out and try to prevent Ronan from using the orb to destroy Xandar.

From the moment young Peter runs out the hospital, the action barely pauses for more than the amount of time for needed for a brief plot explanation, a quick joke, or a testament to revenge, honor, or friendship. The pacing is breathless, and the cosmic, superheroic action – impressively directed by James Gunn almost entirely in CGI beautifully designed by Charles Wood and photographed by Ben Davis – is as thrilling as what Joss Whedon did in The Avengers or George Lucas did in the first Star Wars. But the nonstop action prevents any of the characters from developing into more than just, well, cartoons. I could tell Rocket and Groot had a long and deep friendship and I knew Peter and Gamora were hot for each other, but the details, the explanations, and the emotions are left out. I loved watching Pratt become a movie star, but the movie sent me to the richer, more complicated comic books, where I could learn something about the character he was playing. The film provided only a hint.

Guardians of the Galaxy