Note: This post was originally written for my previous blog, back when I was much less concerned with how I might be perceived by people who might have power over me. I was very angry when I wrote it, and responded to its critics with condescension and sarcasm. Profanity aside, I stand by the gist of the post and my comments; I still believe Kirk Cameron and Ray Comfort miss the entire point of Christianity. That said, I did some editing before reposting it here. 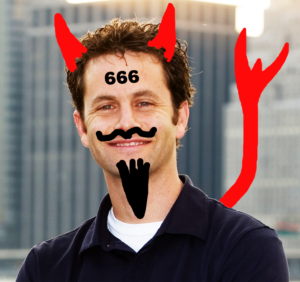 (By the way, is the commandment against taking the Lord’s name in vain the stupidest one? Or is it the one about envy? I can’t decide. Envy is an involuntary response to noticing you have less than someone else and then wanting more. The people who say they aren’t envious of another person are liars. And by saying “God,” how am I taking the Lord’s name in vain? God is not his name, you dipshits. It’s Yahweh, or something like that. Also, what does swearing have to do with being a good person? Nothing. But the Bible, a series of short stories and shaggy-dog jokes written by psychological suspect cultists several thousands of years ago, says, depending on the translation, that I’m going to Hell for saying, “Sweet Jesus!” Dude, I get the thou-shalt-not-kill shit, but swearing means nothing. Read Saussure.)

I found out that Kirk had gone the way of the brainwashed when I saw some E! where-are-they-now show a few years ago. Wait! you say. Who the Hell is Kirk Cameron? you ask. He was the Michael J. Fox wannabe on the “Family Ties” wannabe, “Growing Pains,” in the late 80s. He was super cute. Actually, he still is, in a Joe Pitt sorta way. Anyway, Kirk was borned again (as I like to say it) some time after his fame went all CoreyFeldmanCoreyHaimLeifGarrettRalphMacchio on him. Gee, down and depressed, looking for meaning? Try brainwashing! Suddenly failure is irrelevant! All you need to worry about is waiting for Judgment Day and ruining the lives of gay people!

He and this little irritating Kiwi who looks like a cross between Davy Jones and Sonny Bono, Ray Comfort, have a borned again TV show (video series, website, cereal, chewing gum, toothpaste, etc.) called “The Way of the Master”. (The wiki-version is here.) The idea is that they go around and “talk to people about Christianity.” Actually, they go around and ask people whether or not they’ve taken the Lord’s name in vain, stolen anything, or done any ass-fucking. And they tell them they’re going to Hell. It’s fun for the whole family–except your gay uncle!

Last night, Rob and I were in bed–in our homosexual love den where we blurt out “Jesus Christ!” when the cats wake us up, where we envy people who don’t have to wake up and feed their cats at 5am every morning, and where we drink the blood of babies after we’ve sodomized them–flipping through the channels and we came across the episode of “The Way of the Master” where Kirk and Ray get all Biblical on the fags. Lucky us!

They spent a lot of time quoting the Bible, rolling passages up and down the screen, kind of like FBI warning on videos. Now, I’m not “religious,” but even I knew that the passages they were quoting were rather specious translations. As in Hitler’s translations. The most glaring? The four or five passages that had the word “homosexuals” in them. Considering that neither the word nor the idea existed until the end of the 19th century, you gotta wonder what was really being referred to. But rocks-for-brains “Christians” like Kirk and Roy aren’t worried about translations and what the psychological suspect cultists who wrote the Bible really meant. They just want you to go to Hell. Hell! Hell! Hell!

At one point, Kirk and Ray are driving down the highway in a convertible–What would Jesus drive?–and they are discussing strategies for dealing with their “homosexual friends and family members,” as if they have any gay friends or any gay family members who would be willing talk to them. The strategies come right out of How to Win Friends and Influence People. “Don’t go up to them and tell them that God hates homosexuals and they’re going to Hell, because then they’ll just get defensive. Instead, say, ‘I’m really worried about your eternal soul because the Bible says that what you’re doing isn’t right.’ Let them know how worried you are and then they’ll think about what they’re doing.” Well, now that I know Kirk’s strategy, I’ll be prepared!

Then Roy takes to the streets and interviews some queers. One was a very smart, articulate gay Catholic. He was one of those I-practice-but-the-Catholic-Church-is-whacked folks who impress me. They stay even though they get beaten up every Sunday. Anyway, he smiled and answered Roy’s insipid, insulting questions, and said that he was a good person who would be judged for who he was not whether or not he followed the Bible word-for-word. Then Roy quizzed a 50something transsexual, who had taken the Lord’s name in vain and lied about his gender, and Roy told him he was going to Hell. That’s when I had to turn off the TV. It was worse than the gay-bashing on “American Idol.” Well, maybe not worse. About that same.

I was pissed as I was trying to get to sleep. Kirk. Kirk. Kirk. Why don’t you do something constructive? Like building houses for Katrina victims. Like helping Bono get cheap HIV drugs to developing nations. Like working towards peace, arms reduction, and fair economic policy. Oh, what’s that? Oh, right, I guess it is more important to ruin the lives of good people than the help the poor and sick live longer, better lives.