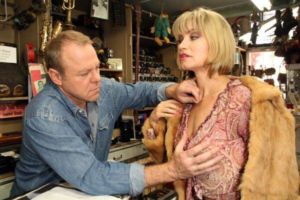 Depending on who you talk to, Paul Verhoeven’s Showgirls is either one of the biggest cinematic disasters of the last 30 years – ineptly acted, written, and danced – or it is a camp masterpiece for the ages – deliberately funny, ironic, and sly. I’m not sure either way. However, the unofficial sequel Showgirl 2: Pennies From Heaven is a great combination of both options. It is utterly incompetently made, with direction and acting only slightly more convincing than what might come from pre-teens with an iPhone. It is also rather funny, and deliberately so. Rena Riffel wrote and directed the movie and stars as hilariously dumb Penny, one of the dancers in the original film, who desperately wants to leave Vegas and become a legitimate star. Her voyage involves murder, prostitution, Freemasons, and more than a few homages to classic scenes from the first film, including a sex scene in a pool that is lesbian version of the iconic and odd copulation of Elizabeth Berkley and Kyle MacLachlan. If Pennies From Heaven had been 90 instead of 145 minutes, it would have been better. The joke can only last so long.