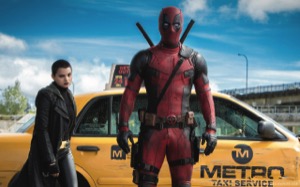 One of the problems with the takeover of popular culture by Marvel and DC superheroes is how seriously the stories take themselves, how easy the morality is and how family-friendly everything is. Monster-budget films like The Avengers and the upcoming Batman vs Superman, or network dramas like The Flash and Agents of SHIELD, aim to reach the broadest audience possible, which means no swearing, little irony and barely a hint of sex. (The Netflix shows Daredevil and Jessica Jones are the exception, as they are niche shows.) Then there’s Deadpool, the raunchy, hyper and hilariously violent, anti-hero’s tale that exploded a dozen box office records last week. Based on one of the edgiest characters in the Marvel X-Men universe, the film both panders to the basest sensibilities of the young men who make up the lion’s share of comic book fans and mercilessly mocks superhero story conventions.

The film begins with the wise-cracking, red-hooded super soldier laying waste to heavily armed bad guys on a highway overpass. The first two acts use this sequence to set up flashbacks explaining how Deadpool got to this moment. A few years before, Wade Wilson (Ryan Reynolds), a very handsome and freakishly competent mercenary, goes around shooting and socking random jerks, for or not for payment. He has a truer moral compass than he claims, repeatedly saying he’s not a hero. One day, he meets a similarly witty and confident regular at his local bar for ne’er-do-wells, a prostitute named Vanessa (Morena Baccarin). A few minutes after they get engaged, he discovers he has advanced cancer (a weird tone shift for the film that until then is pretty light, even in its violence).

Shortly thereafter, a mysterious man in a suit (Hugh Scott) tells Wade his organization can cure and make him superhuman. At first Wade refuses, but then, out of guilt for possibly leaving Vanessa alone, he agrees and sneaks off in the middle of night. It turns out that this organization actually creates mutant slaves for especially evil criminals, and its chief scientist Ajax (Ed Skrein), a sociopath without the ability to feel pain, delights in torturing his patients. Ajax says it’s the only way to activate their latent powers. Eventually, Wade’s powers are activated, and he escapes. But while these powers give him the ability to heal from anything – he can even grow back an amputated hand – they rather horribly disfigure his skin and face: “Whatever they did to me made me totally indestructible… and completely unf@#*able.” Thinking that Vanessa will never want to see him again, Wade dons the moniker Deadpool and lays waste to the underworld looking for Ajax in order to force him to fix what he’s done.

Throughout the film, Wade makes filthy, twisted and obscure jokes; they happen so quickly and so often, I’m looking forward to the DVD so I can catch them all. Very few of them are printable, and I wouldn’t want to ruin the fun of you hearing them fresh. Wade also repeatedly breaks the fourth wall, commenting on the film’s plot directly to the audience, who no one else in the film understands is watching. This works better in the comics, where no characters in the Marvel Universe do this, but it still sets up good jokes and brings the audience into the action. Reynolds, who is an exceptionally winning and charismatic comedian, is as perfectly cast as Deadpool as anyone has been cast as a superhero (more so than Patrick Stewart as Professor X). After being at the center of one of the worst superhero bombs (Green Lantern), Deadpool redeems Reynolds as major star who can carry a franchise.

The other, less visible, winner is Tim Miller, the first-time director who presided over Reynold’s epic performance and Rhett Reese and Paul Wernick’s witty, giddy script.

It’s not easy being green

As you can tell by this gratuitous shirtless-and-wet scene from Amityville Horror, Ryan Reynolds sure has a cray cray good body. Sadly, his Green Lantern wasn’t cray cray good. Here’s the LGBT Weekly link.

Last week, NPR posted on their Web site a superhero movie bingo card. To play, you place your chip over squares for such things as “Training montage,” “Christ allegory,” “Acclaimed British actor looking mortified,” “Homoeroticism,” “Daddy issues,” and “Secret identity … revealed!” Get five in a row, and you win. (I don’t suggest yelling “Bingo!” in the theater.) While watching Green Lantern, the latest in the string of summer superhero movies, I could have won three times.

While it’s an enjoyable escape, DC Comics’ only film this summer – as all of the other movies are based on Marvel characters – is somewhat underwhelming and as clichéd as this review’s headline.

Green Lantern is one of the key characters in the DC universe also populated by Superman, Batman and Wonder Woman. (Spider-Man, The X-Men and Iron Man exist in the Marvel universe.) One of 3,600 super space cops in the Green Lantern Corps, he wears a ring that gives him the nearly unlimited power of green energy, harnessed from the most potent force in the universe: will. The ring allows its wearer to construct anything his or her mind wants, things like green swords, green helicopters or giant green fists.

The Green Lantern Corps has protected the universe from evil for millennia, and this summer’s movie is about the first human to be deemed worthy of the ring and its accompanying skintight green suit. Hal Jordan is chosen by the ring, since will is apparently sentient, after Earth’s sector’s protector, Abin Sur, is killed by the worst threat to the universe ever, Parallax, who is powered and corrupted by the only force that can rival will: fear. Keeping things clear, will is green and fear is yellow.

I never thought of Hal Jordan as a particularly comedic superhero, but by casting Ryan Reynolds in the role and writing to his strengths, the army of credited screenwriters – four, count ’em! – have turned Green Lantern into a wise-cracking frat boy who can fly and conjure up green Gatling guns. Reynolds, who has a baby face and the body of an Olympic athlete, is best known for his romantic comedies, which he excels at, and he’s convincing as a doubt-wracked lothario suddenly given cosmic responsibility. But his acting is not as subtle, deep or explosive as either Robert Downey, Jr. (Iron Man) or Toby Maguire (Spider-Man), so Reynolds’ superhero is, well, a bit cartoonish, if fun to look at.

Peter Sarsgaard, who plays a scientist infected by Parallax, is covered with hideous prosthetics for most of the film, but his quips and whines are more resonant than the close-ups of Reynolds’ face as he attempts to look pained when he thinks about his dead father.

Meanwhile, Blake Lively, who proved her mettle in last year’s The Town, doesn’t have enough to do; she’s as pretty and tough as action film love interests are supposed to be, but her Carol Ferris is no Lois Lane.

I saw Green Lantern in 3-D, and it was one of the better uses of the technology of the last several years. Still, the colors were muddied, and the visual trickery seemed superfluous. Director Martin Campbell, who so smartly rebooted James Bond with the almost all-analog Casino Royale, was not suited for the almost entirely CGI-ed action sequences. They lacked danger, intensity or art, all of which would have made the film clichés less glaring.