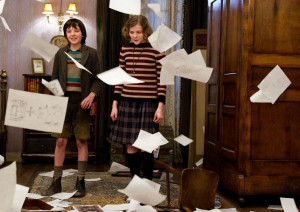 My latest review is up at San Diego LGBT Weekly. If you can’t be bothered to click over, I’ve posted the whole thing below:

I may lose all credibility as a film critic by admitting that I am not much of a Martin Scorsese fan. Aside from The Departed, I’ve never actually enjoyed one of his films, even if I’ve respected them. There’s no doubt that he is a technical genius – his scene settings and camera work are visionary and sometimes thrilling, and he’s directed some actors to some great performances – but his stories tend toward either the violent or the extravagant or extravagantly violent. Scorsese does not believe in subtlety, and I don’t like to be bombarded by my art. I understand why his fans are his fans, but he just doesn’t make the kinds of movies that move me. Perhaps this is why I was in awe of his latest film, the extravagant Hugo, but I am not in love with it.

Hugo has been described as his first children’s film, and it is based on the Caldicot Award-winning novel The Invention of Hugo Cabret, written by Brian Selznick, who is gay and lives in La Jolla. The story follows Hugo, an orphaned boy (Asa Butterfield) living in the walls of a Paris train station in the 1930s. He spends his time tending to the station’s many clocks, stealing food, and avoiding the station’s inspector (Sacha Baron Cohen), who gets his kicks catching children and sending them to orphanages. He also is trying to fix a robot-like “automaton,” which his father (Jude Law) had found in an attic of a museum before he was killed in a fire. When a very grumpy toy shop owner named Georges (Ben Kingsley) catches Hugo trying to steal a wind-up mouse, Georges takes Hugo’s notebook, which is full of drawings Hugo’s father did of the automaton. For some reason, the notebook profoundly upsets Georges, and Hugo’s quest to retrieve it leads to a friendship with Georges’s goddaughter (Chloë Grace Moretz) and to, well, an adventure. It’s a movie for children, after all.

Except that I can’t imagine very many children being entertained by Hugo. The beauty of the art direction (by the great Dante Ferretti), the truly great 3-D cinematography, and Cohen’s slapstick comedy, particularly during the many chase scenes, will widen some children’s eyes. But the plot is a very slow build, and neither Butterfield nor Moretz are particularly charismatic or well directed. That the story ultimately revolves around rehabilitating the career of a great silent film director doesn’t help. For Scorsese’s fans, the film within a film and the numerous homages to some of early cinema’s most iconic moments will lead to him being called genius, yet again.

Hugo is a rather good movie. Its technical brilliance is the main reason, but the performances of Kingsley and Cohen are the other. Kingsley is incapable of a bad performance; his seriousness of purpose, his deliberateness and his ability to communicate five or six complex emotions when he is just silently sitting on a stool. And Cohen’s physical comedy has never been doubted, but this is the first time I have seen him subdued enough to be truly likeable. Perhaps, this is where Scorcese is actually subtle, in turning Borat into someone a little bit like Charlie Chaplin.