My Seven Favorite Films of 2013

This post is also known as “The 2013 Golden Teddy Awards for Most Excellence in Film, Part 1.”

I don’t think the 2013 was much of a year for movies, since I spent a long, long time to find ten that I could unreservedly say I loved. And in the end I chose seven because the other three slots kept getting filled with movies that I had problems with even if I liked them. Most of those movies I liked because of one or two performances, or a performance and a script, or just the direction, and so on, but there were other things that bugged me a little too much. These seven are films for which everything comes together for me and I’ve found myself saying, “Oh, you have to see that.” 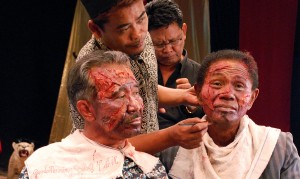 The Act of Killing. Joshua Oppenheimer, Director. With inarguably the most important film released this year, Oppenheimer lays bare the emotional and moral reverberations of violence in a way no documentarian has ever done before. Interviews with several men who were leaders of death squads in Indonesia during the 1960s civil unrest become recreations of the hundreds of murders they committed, with these now old men playing themselves and sometimes their victims in dreamy, nightmarish homages to noir films, westerns, and musicals. Nearly 50 years after their crimes, these men confront their actions and both the selfish justifications and sudden guilt are unnerving to watch. Four months after seeing the film, I am still haunted by it. Open for about a week in San Diego in August, it will be on DVD just after New Year’s. Named the Best Documentary of 2013 by the San Diego Film Critics Society, as well as by most of the other critics in the world. (Full disclosure, Oppenheimer and I were friends in college.) 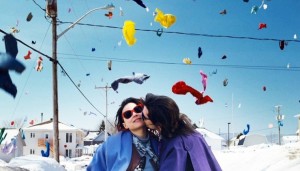 Laurence, Anyways. Xavier Dolan, Director. In this three-hour masterpiece by the 24-year-old Quebecois Almodovar, Laurence (Melvil Poupaud) and Fred (short for Frederique, played by the brilliant Suzanne Clément) weather Laurence’s transition from man to woman from 1989 to 1999. Laurence, Anyways isn’t simply focused on acceptance, discrimination, and honesty, but rather on the enormously complex and painful ramifications of the transition on relationships. Laurence and Fred are still in love, even after Laurence reveals that he has always been a woman trapped in a man’s body. But Fred does not know how to be in love with a woman, and Laurence doesn’t know how to stay being a man to be with her. While I’m sure Dolan wants his films to be seen by millions, he clearly is uninterested in pandering to them. His screenplays require work from the audience, with the kind of spoken and obvious verbal exposition (“I had an affair”) left out in favor of expressionistic tableaus. In one turning point, Fred wears a lace ball gown and literally floats through a glam rock black tie party while Visage’s New Wave Classic “Fade to Grey” plays. I was watching the film on DVD and rewatched several of these scenes, muttering “Oh, my God” over and over. 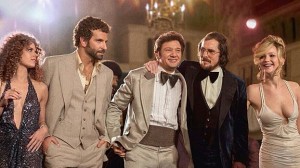 American Hustle. David O. Russell, Director. In this comic fictionalization of the Abscam scandal in the 1970s – in which the FBI gleefully, unethically entrapped more than a dozen politicians including six members of the House of Representatives and a Senator – Russell has made his best movie, and he’s the guy who gave us The Fighter and Silver Linings Playbook. Christian Bale gained 50 pounds, a terrible comb-over, and a Bronx accent to play con artist Irving Rosenfeld, who suckers people desperate for loans with his mistress Sydney Prosser, played by vampish, quietly desperate Amy Adams. Pathologically ambitious and coked-up Agent Richie DiMaso (Bradley Cooper) busts and forces them to teach him how to hustle so that he can sucker politicians into committing crimes. He goes after Camden Mayer Carmine Polito (Jeremy Renner), who is actually trying to do the right thing, and he goes after Amy, who is already upset that Irving can’t leave his wife, a scenery chewing and stealing hysterical Jennifer Lawrence. The costumes are almost as great as the acting. Opens December 20.

Her. Spike Jonze, Director. Voted the Best Film of 2013 by the San Diego Film Critics Society, Her is the least flashy of Jonze’s movies, substituting the wondrous quirk of Being John Malkovich with a lush depiction of romance. That romance, however, is between a lonely writer of love-notes named Theodore (Joaquin Phoenix) and an artificial intelligence named Samantha (Scarlett Johanssen) whose voice and emotional life are its only human resemblances. Taking place in the near future, the film is technically science fiction, but very little of what makes Her great is in its technological speculation. Rather, it is how Theodore and Samantha talk to each other, court, and become better, expansive, vulnerable lovers; the film is ultimately about self-realization. Its actors and production design are gorgeously photographed. Opens January 10. 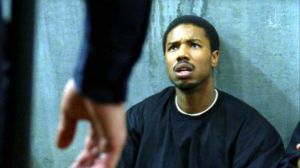 Fruitvale Station. Ryan Coogler, Director. Fruitvale Station is the story of Oscar Grant, a 22-year-old black man from Hayward who was killed by a white police officer while being held at a BART station in the early morning of New Year’s Day, 2009. Coogler tells the tragedy of Oscar’s New Year’s Eve, creating a nearly agonizing narrative tension as we watch Oscar (Michael B. Jordan) take his daughter (Ariana Neal) to school, girlfriend (Melonie Diaz) to work, then buy crabs for the birthday of his mother (Octavia Spencer), try to get his job back at the supermarket, decide not to go back to drug-dealing, go to his family’s party, all the while barreling towards that BART station. Coogler’s impeccably structured screenplay creates a very subtle but powerful suspense out of what is basically a Dalloway-ish domestic documentary, and his direction of Jordan, Diaz, Neal, and Spencer elicited empathic performances that should move anyone. By the end of the film, even after knowing what was going to happen the whole time, I was heart-broken, devastated by a movie for the first time in half a decade. On DVD. 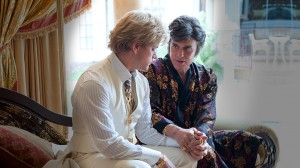 Behind the Candelabra. Steven Soderbergh, Director. So, it wasn’t released in theaters, just HBO, but it’s better than 99.9% of those that were, and if it had been it would be up for a bunch of Oscars. Michael Douglas deftly plays Liberace, the man who may not have invented the flamboyant queen certainly became iconic of own, and Matt Damon plays his much younger lover and muse Scott Thorson. Their relationship is imbalanced, bizarre, hilarious, heartbreaking, and loving, and Soderbergh’s direction of Richard LaGravenese’s screenplay treats all of this with both respect and irony. Rob Lowe is creepy-comic genius as their plastic surgeon. On DVD. 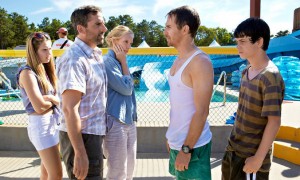 The Way, Way Back. Nat Faxon and Jim Rash, Directors. A coming-of-age comedy set in a summer beach town and its local water park, The Way, Way Back was a funny, moving, a crowd-pleasing antidote to the bombastic action films that dominated the theaters this summer. Duncan (Liam James) is a quiet, depressive 14-year-old boy who is spending the summer at his mother’s (Toni Collette) hideous boyfriend’s (Steve Carrell) beach house. Duncan escapes to the local water park Water Wizz, where he is befriend by the gregarious manager Owen (Sam Rockwell), who presides over a motley crew of amusement park jokesters. This is where Duncan learns, mostly from the avuncular empathic Owen, how to come out of his shell, and this ability to confront reality ultimately leads to a climactic confrontation with Trent. Faxon and Rash’s screenplay is emotionally accurate, funny, and, at the right moments, extremely sweet. Probably even more impressive, however, is the film’s massive casting which includes Alison Janney, Amanda Peet, Rob Corddry, and Maya Rudolph. On DVD.

And the runners-up, with the reasons for their awesome-ness and my reservations:

12 Years A Slave: Everything about the movie is good, except for the fact that it is obvious.

Short Term 12: Brie Larson gives a career-making performance, but it just didn’t move me the way it did others.

Gravity: Best direction of 2013 and a great Sandra Bullock, but a wretched script.

The Spectacular Now: Miles Tiller and Shailene Woodley are wondrous, but it’s basically a depressing, less wondrous Say Anything.

The Great Gatsby: Baz Luhrmann and his crew (production design, cinematographer, editors, composer, and Jay-Z) are a geniuses, but casting Carey Mulligan as Daisy was big mess.

Inside Llewyn Davis: Every image and every scene are amazing, but nothing happens.

Warm Bodies: Rome & Juliet with zombies, which is truly inspired, and it’s very well done, but it’s not that good.

Blue is the Warmest Color: It’s good–particularly the acting–but, again, it’s not that good.