His computer’s voice is Her 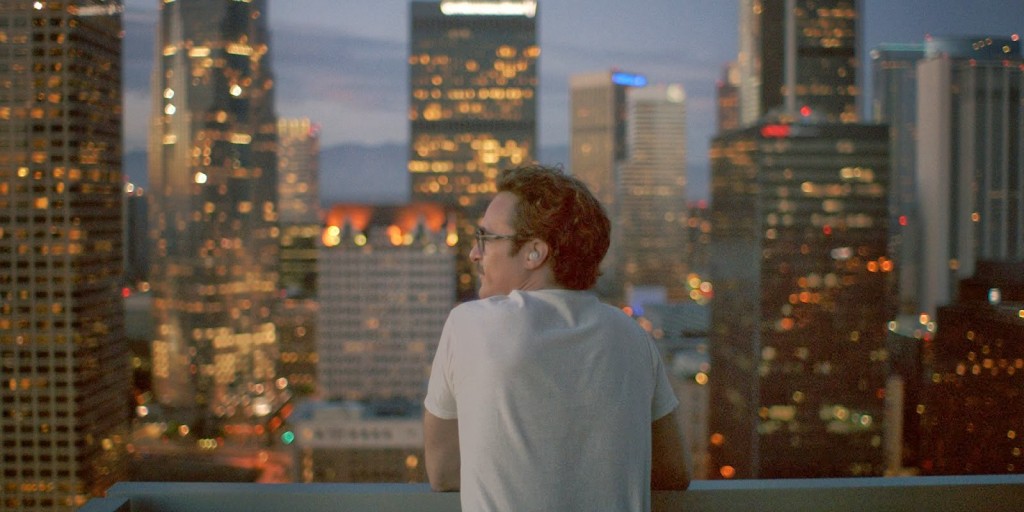 Two years ago, Apple introduced Siri, a program for their iPhones that acts like a personal assistant, complete with a female voice. You talk to it, it talks back, and the famous advertisements featured conversations between celebrities and Siri made her seem, well, intelligent. Anyone who has used Siri knows Siri isn’t as helpful as advertised and or all that smart, but in Her, Spike Jonze’s astonishing and moving masterpiece, the personal assistant program that Theodore Twombly (Joaquin Phoenix) buys on a lark is not just helpful and smart, but intuitive and, most importantly, emotional.

The surprisingly real artificial intelligence is a science fiction trope that has been mined many times, most profoundly in Blade Runner and AI, but usually these stories focus on the program’s development of sentience and the horrid consequences therein. Her, however, does something very different by exploring what happens when a human and an artificial intelligence fall in love.

Not far in the future, Theodore works at a company that produces handwritten letters for clients; Theodore writes love letters for couples, missives from parents to children, thank you notes. The irony is readily apparent: While he writes deeply and beautifully emotional words for others, Theodore is depressed, isolated, and not in touch with or much aware of his own emotions. He has recently split with his wife (Rooney Mara), with whom he had a tortured, angry relationship.

After a particularly sad failed blind date, he comes across a display for a new artificially intelligent personal assistant. After he installs it, a female voice emanates from his computer and introduces herself as Samantha, who is voiced by Scarlett Johansson. She doesn’t sound like Siri, but rather like a human woman who lives inside a computer or a phone. She is warm, funny, devoted to Theodore, and, surprising for a computer program, she has free will. They fall in love, and since Samantha is only a voice and has a life on the internet that Theodore cannot see, complications ensue.

The plot seemed almost silly when I first heard about it, but Spike Jonze’s script gives Theodore and Samantha such a complex, sweet, and difficult relationship, the odd conceit of the film is quickly subsumed by a profound romance. It also helps that Jonze has created such a complete world of the near future, a world as complete as those in Being John Malkovich and Where the Wild Things Are. The art direction, which focuses on pastels and soft postmodern architecture, is beautifully shot by the great cinematographer Hoyte Van Hoytema. It’s one of the most beautiful visions of the future I’ve seen on film.

As much as Her is about Spike Jonze’s genius, it is also a vehicle for Joaquin Phoenix’s incredible talents. After his intensely dark turn in The Master, seeing him as Theodore, who is sweet, sensitive, very much in love, and nearly heroic in his emotional journey, is a revelation. I always assumed that Phoenix’s characters would always be some shade of creepy; even his Johnny Cash was rather unnerving. But Theodore is the sort character Tom Hanks used to play. Phoenix, however, seems perfectly cast, even if it’s a surprising role. He is becoming the great actor of his generation.

My Seven Favorite Films of 2013

This post is also known as “The 2013 Golden Teddy Awards for Most Excellence in Film, Part 1.”

I don’t think the 2013 was much of a year for movies, since I spent a long, long time to find ten that I could unreservedly say I loved. And in the end I chose seven because the other three slots kept getting filled with movies that I had problems with even if I liked them. Most of those movies I liked because of one or two performances, or a performance and a script, or just the direction, and so on, but there were other things that bugged me a little too much. These seven are films for which everything comes together for me and I’ve found myself saying, “Oh, you have to see that.” END_OF_DOCUMENT_TOKEN_TO_BE_REPLACED