I forgot to post these movie reviews, which all ran in LGBT Weekly over the last few months. 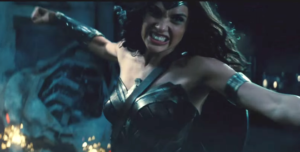 I was unable to see the mega-hyped, mega-budget Batman v Superman: Dawn of Justice before other critics ran their reviews. And because many of the reviewers were so dismissive or so hyperbolic in their criticism, the news of the film’s opening was overshadowed by the blood sport of Internet overkill. The Wall Street Journal’s Joe Morgenstern called it “underdeveloped, overlong and stupendously dispiriting” and NPR’s Chris Klimek described the film as “a ponderous, smothering, over-pixelated zeppelin crash of a movie scored by a choir that sounds like it’s being drowned in lava.” A meme of Ben Affleck’s dejected facial expression in response to hearing about the reviews was shared by millions of people who weirdly find glee in the sadness of others. I found it impossible to avoid knowing that a lot of people thought the movie was terrible. But when I did see it, I was perplexed. While BvS is certainly not a masterpiece of the genre – neither as morally complex and smart as The Dark Knight nor as fun and thrilling as The Avengers – it is hardly a “zeppelin crash.” It’s pretentious and bombastic and it rewrites the central ethos of its main characters in ways that are disconcerting for some longtime fans. But it’s not an ineptly made film. [Read the rest.]

Hello, My Name Is Doris 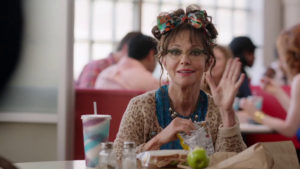 At various times in my life, I’ve frequented nightclubs: loud music, overpriced drinks, spinning lights, smoke machines and usually young people dancing in outfits chosen to attract the gaze and attention of other, hopefully very attractive dancers. Occasionally, people would stick out. A guy who arrived in loafers and Dockers, a bachelorette dancing in a white veil and an older person in what someone might call “age-inappropriate clothing.” There’d be that one woman over 60 in a miniskirt, a glittery wig, chunky earrings and an original Sex Pistols concert T-shirt. I always loved this woman, not just because it takes a lot of guts to go dancing in a club full of kids younger than her children (if she had any), but also because I knew she had a story, a good story. Hello, My Name is Doris is one such story. Starring a brilliant Sally Field and co-written and directed by Wet Hot American Summer’s Michael Showalter, the delightful Doris is both heartfelt and cringeworthy. [Read the rest.] 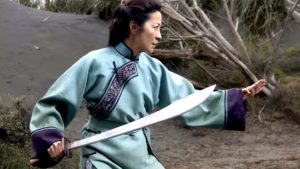 Crouching Tiger, Hidden Dragon is one of those movies that everyone likes. The seamless blend of ground-breaking martial arts action, two epic love stories, feminist character arcs, high art visuals, gorgeous music and the great director Ang Lee made the film beloved of everyone from teenage action fans to cineastes, men and women, boys and girls. More than once, I was told seeing it was like seeing Star Wars for the first time – revelatory. Even though the film is based on the fourth novel of The Crane-Iron pentology by Du Lu Wang, no one seriously suggested that Ang Lee make the prequels or a sequel. But the Weinstein Company is never one not to see branded opportunity, and 15 years later they decided to make a film based on the fifth of Wang’s books, Iron Knight, Silver Vase, and release it on Netflix and in theaters simultaneously. (Most theaters balked.) Despite hiring Woo-Ping Yuen to direct and convincing Michelle Yeoh to reprise her iconic role as Shu Lien, Crouching Tiger, Hidden Dragon: Sword of Destiny is forgettable, mostly pleasing as a reminder of a much, much better movie. [Read the rest.] 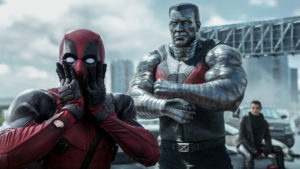 One of the problems with the takeover of popular culture by Marvel and DC superheroes is how seriously the stories take themselves, how easy the morality is and how family-friendly everything is. Monster-budget films likeThe Avengers and the upcoming Batman vs Superman, or network dramas like The Flash andAgents of SHIELD, aim to reach the broadest audience possible, which means no swearing, little irony and barely a hint of sex. (The Netflix shows Daredevil andJessica Jones are the exception, as they are niche shows.) Then there’sDeadpool, the raunchy, hyper and hilariously violent, anti-hero’s tale that exploded a dozen box office records last week. Based on one of the edgiest characters in the Marvel X-Men universe, the film both panders to the basest sensibilities of the young men who make up the lion’s share of comic book fans and mercilessly mocks superhero story conventions. [Read the rest.] 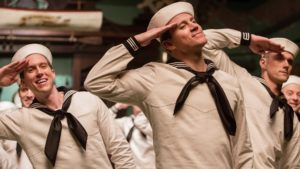 While I am a huge fan of the Coen brothers, I must acknowledge that they make some odd decisions that produce some ambiguous if not totally perplexing moments: The off-screen death of a major character in No Country for Old Men, the tornado that ends A Serious Man, the lack of any plot in Inside Llewyn Davis and pretty much all of The Big Lebowski. Usually, these weird scenes are aesthetically so interesting or so funny or, after some thought, thematically satisfying that the Coens get away with them, and they often end up being the most iconic parts of the films. But it doesn’t always work that way. Maybe I need a few months to think about Hail, Caesar! but right now, the over-stuffed incoherence and very odd political choices in the film don’t work. It’s rather unfortunate, too, because the Coens put together a fantastic cast and crafted a dozen or so near-genius scenes in Hail, Caesar! – including Channing Tatum in a nearly epic song-and-dance number – but it would have been nice to see they serve some purpose. [Read the rest.} 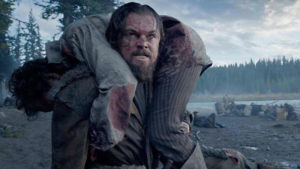 A great deal has been written, said and tweeted regarding how, for the second year in a row, each one of the 20 actors nominated for an Academy Award this year are white. According to the Los Angeles Times, the Academy is 94 percent white, 2 percent African American and less than 2 percent Latino. The median age is 62, and only 14 percent of the membership is under 50. And 77 percent of members are men.

Even if Hollywood as a whole is supposedly very liberal, old white men are in general not likely to support people of color – in whatever venue, whether film awards or politics.

The Revenant, a ruthless and bombastic tale of revenge in the cold western American frontier, is the kind of movie many men like. The Academy nominated it for 12 Oscars, more than any other this year, and the film is currently holding an 8.3 rating on IMDb, ranking it as the 124th greatest movie of all time. About 80,000 of the IMDb votes came from men, and 13,000 from women. I don’t want to say that men like The Revenant so much because no woman speaks in it, but of the two female characters, neither have audible lines in their few minutes on screen. (One is murdered, the other is raped.) According to the site’s stats, the women who saw the film rated it nearly as high as men, but any film executive will tell you that fewer women are drawn to films so violent, so depleted of female voices or faces, and so focused on themes of classic male heroism. [Read the rest.]

My top 10 list is never a list of the “best” movies, but rather the ones I liked the most. This is because I think there are some movies that might be technically better made that I didn’t actually enjoy, for whatever reason. Like Room. Anyway, here are my favorite movies of 2015.

Movies that I also liked a lot or thought were very well made: The Martian. 45 Years. Sicario. Straight out of Compton. Steve Jobs. Star Wars: The Force Awakens. Anomalisa. The Clouds of Sils Maria. Room. Antman. Inside Out. While We’re Young. Magic Mike XXL.