My top 10 list is never a list of the “best” movies, but rather the ones I liked the most. This is because I think there are some movies that might be technically better made that I didn’t actually enjoy, for whatever reason. Like Room. Anyway, here are my favorite movies of 2015.

Movies that I also liked a lot or thought were very well made: The Martian. 45 Years. Sicario. Straight out of Compton. Steve Jobs. Star Wars: The Force Awakens. Anomalisa. The Clouds of Sils Maria. Room. Antman. Inside Out. While We’re Young. Magic Mike XXL.

Destroyed by her own pretensions 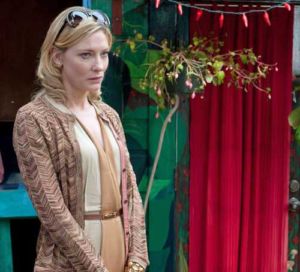 I’m not sure why Woody Allen decided to set Blue Jasmine in San Francisco. He can turn a city into a main character of his films; from Manhattan to Vicki Cristina Barcelona to Midnight in Paris. But in Blue Jasmine, the city is neither lovingly shot nor does it really have a role to play other than as place for Jasmine (Cate Blanchett) to escape to after her life and her mind fall apart. It could have been Portland or San Diego or Skokie. And I always wonder how someone can set a story in San Francisco and not even make a casual reference to gay people. Or black people. The only Asian in Blue Jasmine plays a New York lawyer with one line who is passingly referred to as a “dragon lady.” But Woody Allen has never had a wide view of the world; in his more than 40 films, he has depicted an extremely small segment of American society, usually wealthy and upper middle class white people with profoundly neurotic interior lives. And he does this with unparalleled insight and humor and with some of the most interesting female characters in film history. In Blue Jasmine, he has provided Blanchett, arguably the greatest actress of her generation, her greatest role, a woman destroyed by her own pretensions.

Jasmine isn’t even her name; she was named Jeanette by the parents who adopted her and her sister Ginger (Sally Hawkins). In college, she renamed herself after the night-blooming flower to seem more interesting. She did something right, with her name and with the person she wanted to be seen as. She met Hal (Alex Baldwin) on Martha’s Vineyard when she was still in college, and she dropped out to marry him. He was New York financial mover and shaker, and when we meet Jasmine, it is after Hal has been arrested for massive fraud, after they lost their millions and their houses. Jasmine has moved to San Francisco to start anew, but also because her sister, a grocery store cashier, has agreed to take her in.

Ginger has two pudgy kids, a gruff ex-husband (Andrew Dice Clay, no joke), a loud-mouthed mechanic boyfriend (Bobby Cannavale), and walk-up in the Mission (that no one working as a cashier could ever afford, but that’s neither here nor there). Jasmine is appalled that her life has come to this, and she has a hard time not expressing it, either in her affected Diane Sawyer accent or with her anxious frowns, or with a Stoli martini, or multiple doses of Xanax. She thinks she will be able to find her way back into the fold of the moneyed and powerful, and when she meets the perfect man (Peter Saarsgard), a diplomat with inexplicably large amounts of her money, she lies through her teeth to get him. Her denial is breathtaking, sometimes funny, but ultimately tragic.

Blue Jasmine is not the witty, literate romp of Midnight in Paris or the love-sex comedy of Vicki Christina Barcelona. Its comedy is in the nervous discomfort of class warfare, the clueless vapidity of the rich and capitalistic. It is Allen shredding New York’s myopic cruelty, both for our amusement and as guilt-free schadenfreude. We giggle, but Jasmine herself is not a comic character, and the lives both she and Ginger lead are not comic. Blanchett’s Jasmine is both reprehensible and sympathetic, while Hawkins’ Ginger is sweet, understanding, and as comfortable in her own skin and her lot in life as Jasmine is not with her own. Blanchett is so good and so flashy in her excellence that it’s easy to not notice how good Hawkins is, too. And it’s also easy not to notice how great, how sly and smart and scathing, Allen’s screenplay is. Despite Allen’s underuse of San Francisco, Blue Jasmine is yet another triumph for him. However, Blanchett is the one who will win the Oscar.