1. I just discovered that Jens Lekman and Annika Norlin released an album last year called Correspondence, and I listened to it last week on the way to work, and it’s all so quietly powerful in its seeming mundanity. I think my favorite song is “Forever Young, Forever Beautiful,” which has some classic Jens lyrics:

You should have seen him in his summer clothes
The short pants that gently exposed
His calves that spoke of hidden treasures
Golden ratios, unknown pleasures

2. I consolidated books and glassware so that I could empty, dismantle, and store one of my IKEA bookshelves, creating some space that I could fill with a little dining table. Now I can eat meals at a table, not on the sofa or at my desk. The first meal was steak, asparagus, and polenta on Valentine’s Day.

3. The next day, I accompanied my Valentine to Cal Arts to hear a Master’s student there play Derek’s composition “Savino,” a piece for solo marimba and tape, that latter of which is the recording of New York State Senator Diane J. Savino’s speech in support of marriage equality given on December 2, 2009. Like the speech, Derek’s composition is beautiful, but in a very different way as it intricately punctuated Savino’s humor, wisdom, and love. I don’t have video of the Cal Arts student’s performance, but here’s the percussionist who commissioned the composition Brandon Ilaw.

4. I made a chocolate soufflé on Saturday night, and I think it came out perfectly. I’ve made chocolate souffles before, but for some reason, this was the richest, fluffiest, and it didn’t collapse. I’m not exactly sure what I did right-er this time, but I think one thing was not over stirring the batter, which tends to screw up the egg whites. The recipe is Bittersweet Chocolate Soufflé by Melissa Clark from The New York Times. 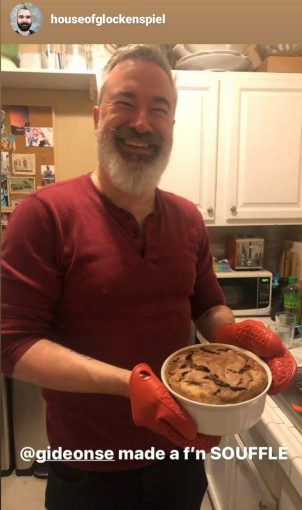 5. This article in The New Yorker: Was Jeanne Calment the Oldest Person Who Ever Lived—or a Fraud? I love a good high-nerd yarn, and this one is full of lies and skepticism and competing methodologies and a crotchety old French lady.

6. I wish I could have photographed the facial expression of the flummoxed woman in my AIDS Fundamentals class when I mentioned that Iowa once sentenced an HIV-positive man to 25 years in jail for not telling his sexual partner his status — even though he wore a condom and had an undetectable viral load. I thought her head was going to explode she was so appalled. He was eventually exonerated and the law was changed, but it’s still hard to believe it happened in this century.

7. I can’t stop listening to the audiobooks for Patricia Briggs’s Mercy Thompson series – an urban fantasy with werewolves, vampires, fae, and so on set in Washington’s Tri-Cities. There are definitely some things I could do without, like the weirdly stereotyped gay divorce lawyer Kyle and the narrator’s camp voice for him, but my commute hasn’t sucked for a couple weeks because I’m entertained enough.

8. These shoes I got 60% off at the Reebok outlet at the Citadel. Derek called the color “electric salmon.” 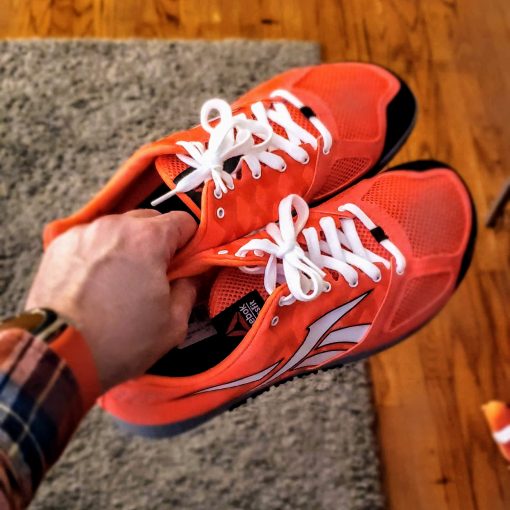 9. I’ll be moderating a panel titled “Navigating Stigma and Addressing Peer Aggression, Harassment, Discrimination, and Exclusion for Queer- and Trans-Spectrum Students and Faculty” at the annual meeting of the Association of School and Programs in Public Health next month.

10. I stumbled onto the pilot of Zoey’s Extraordinary Playlist on Hulu; Zoey suddenly hears people’s inner monologues, but only as popular songs, and usually accompanied by dance routines. There’s a lot of stuff that I’m going to automatically love about it, in particular Jane Levy, Skyler Astin, Alex Newell, and lots of singing and dancing. But, omg, Peter Gallagher playing Zoey’s father, who is suffering from a degenerative neurological disease that has left him unable to speak, gets to do heartbreaking stuff like this.

It took a couple hours, but I’ve started crying. Partly, it’s the staggering shift from my childhood in Cincinnati, when and where being gay was treated more or less the same as being a pedophile, to my adulthood in LA, when and where my gayness is at least protected by the state (and the State) and the vast, vast majority of people I deal with on a daily basis either celebrate who I am or don’t give a rat’s ass. Partly, it’s remembering my wedding, when I married Rob, back when it wasn’t even legal in New York, and it will always be one of the greatest days of my life. Partly, it’s because of remembering losing Prop 8 and the debilitating sorrow I felt. Partly, it’s because that sorrow was made powerfully profound knowing that my neighbors and some of my family members and millions of strangers had contributed to it. Partly, it’s that my marriage and my subsequent partnership didn’t survive to this day, that having the right to love doesn’t give you the ability to make it last. Partly, it’s knowing how this ruling will change the lives, in concrete ways, of friends I have in Michigan and Ohio and Texas (and everywhere else), and these changes, the assurances and protections, are so needed and so great. Partly, it’s that I haven’t had any coffee yet, since I haven’t been able to tear my eyes from the computer screen. Partly, it’s knowing that I am going to the wedding of my dear friend Curtis in a few months, and it will be the first time that I will be at the wedding of two gay people and it won’t be a subversive act, and that is such a relief.