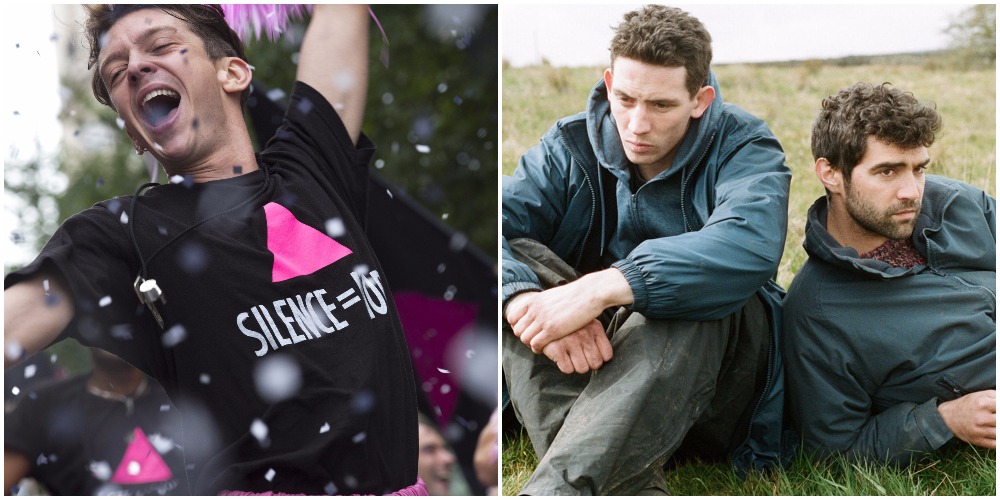 Opening this Friday in San Diego, God’s Own Country has been described as the British Brokeback Mountain, which is both accurate and hyperbolic. Both are about star-crossed lovers who meet while tending to livestock in a sparse landscape, but this time it’s Yorkshire, not Wyoming. Johnny (Josh O’Connor) is the only son of a debilitated farmer (Ian Hart), and his bitterness about being trapped on the farm has led him to alcoholic shenanigans including but not limited to hooking up with strange men in barns. When they hire a migrant farmhand from Romania named Gheorghe (Alec Secareanu), Johnny is at first angry at the more competent and controlled interloper. And then they figure out what each other want, and it’s each other, and it’s not easy.

Unlike Brokeback Mountain, which had a deceptively complicated narrative and gut-wrenching emotional realism, God’s Own Country follows a standard romance plot and has more familiar conflicts – albeit with gorgeous and naturalistic imagery and an ending that will satisfy many viewers. While I don’t think the artistry of Brokeback and Ang Lee is surpassed by God’s Own Country, the new film is exquisitely made. Writer and director Francis Lee’s taciturn characters and stark scenes hide powerful symbolism and complicated people, and his actors are roundly stunning. O’Connor’s Johnny is a jerk, but his growth makes him sympathetic, and the performance is gritty, angry and beautiful. Secareanu’s Gheorghe doesn’t have the same kind of arc, but he does for the audience what he does for Johnny: we fall in love with him and his deep, beautiful eyes. The great Gemma Jones plays Johnny’s dutiful, loyal, deeply worried grandmother, and it’s a wise, agonizing performance.

A week later, one of the other great queer-themed films of 2017 opens. BPM (Beats Per Minute) was recently named as France’s official submission for the foreign language Oscar; in June, it won four awards at Cannes. And it’s arguably the greatest film about AIDS made in any language. It follows several members of ACT-UP Paris during the early 1990s, concentrating on the group’s various political conflicts and a relationship between young, furious HIV positive Sean (Nahuel Pérez Biscayart) and the handsome activist newcomer Nathan (Arnaud Valois). The film’s focus in the beginning is on ACT-UP meetings, and writer-director Robin Campillo, an ACT-UP Paris veteran, makes them thrilling, frustrating, enraging and awe-inspiring. Over meetings and various actions, Sean and Nathan fall in love, and the film’s superb final act examines Sean’s worsening health and Nathan’s (and other ACT-UP members’) devotion to him.

Even though BPM is arriving 25 years after the height of ACT-UP’s work, its urgency is palpable; despite being firmly ensconced in a particular historical moment, the drama and the emotions do not feel anachronistic. Partly, this is because of how compelling Campillo has directed various key scenes, but it is also because several of the main plot points – pharmaceutical greed, fear of sexuality, bigotry – are still of great concern to all of us. And Campillo does not flinch from the sex, illness, sadness, lust and anger like so many AIDS films before that were made to play well in Peoria. BPM is instructive, enraging, devastating and beautiful. It’s one of the most important films of the year – queer and not – and shouldn’t be missed.